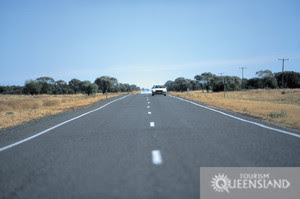 The collection of highways traversing Queensland's Western Downs take the traveller on a journey which is rich in history writes Adrienne Costin.

Look at a map of the Western Downs, an area of roughly 126,000 sqkm to the west of Brisbane and you'll find an impressive collection of highways as it is the hub for the road network travelling north/south and east/west in Queensland.

Nine highways run through the region if you include the Carnarvon Highway, which starts at Mungindi on the southern border and leads north to the Carnarvon National Park above Injune, the Barwon which runs between Goondiwindi and St George and is named after the Barwon River, a main tributary of the Darling River, as well as the Moonie and Balonne Highways which are part of the Adventure Way.

The Great Inland Way enters the Downs from the south at the tiny town of Hebel, population 28, home to a welcoming pub and the tearooms at the Crafty Yum Yum Café. Like the rest of the Downs, the land around the little township stretches leisurely to the horizon, sometimes framed by trees or dotted with lonely specimens who stand tall alone. The Hotel opened in 1894 and was a Cobb & Co stopover. The original village store, built three years later also remains and local legend also reckons the Kelly gang used the town as a hang out.

Travel north to St George and 45km out of town watch the left for the signs to the Nindigully Pub, Queensland's oldest hotel which still stands in its original condition and location on the banks of the Moonie River. The pub's licence was issued back in 1864 when they brewed their own beer and rum. It's still a great place to for a quiet ale, even on days when special events like the Nindigully Pig Races and New Year's Eve aren't taking place.

The highway continues on to Surat, the town from which the last scheduled Cobb and Co coach left before stopping forever at nearby Yuleba. This historic run is commemorated at the Cobb and Co Changing Station, a local landmark which is home to a museum, art gallery and 25,000 litre fresh-water aquarium.

Nearby Roma and the surrounding countryside were first explored more than 150 years ago by Sir Thomas Mitchell. The unofficial capital of the region dates back to 1867 when it was named after Lady Diamantina Roma Bowen, the wife of the Governor at the time.

This thriving rural town has plenty to offer the modern day visitor but history still plays a major role and one of its most popular attractions is the Big Rig, a fascinating tribute to Australia's oil and gas industry which includes a spectacular night show. This is a rich agricultural and farming area, and grapes have been grown here for many years. In fact, Queensland's oldest winery, Romavilla has been producing table and fortified wines since 1863 and proudly continues to do so.

Even the trees are historic. The Avenue of Heroes is a heritage listed avenue of 138 bottle trees within the town which were planted as a tribute to soldiers from the district who lost their lives in World War 1. Mt Abundance Homestead outside town was the site of the first settlement in the region and was built in 1860. Visitors are still welcome.

Follow the road north and you'll go right past the Carnarvon National Park, home of the spectacular Carnarvon Gorge with its ancient rainforest and some of the finest Aboriginal Rock Art in Australia.

The Adventure Way is the link between Brisbane and Adelaide and includes two State highways as it passes through the Downs, the Moonie Highway, a 285km stretch of road from Dalby to St George and the Balonne.

As can be assumed by it's name, the Moonie Highway passes through the tiny town of Moonie which was the site of Australia's first commercial oil field. It opened in December 1961 and despite being a relatively small field is still operational today. At St George the highway becomes the Balonne for 300km to Cunnamulla, mostly following the Balonne River.

The Warrego Highway is the 744km stretch from Brisbane which enters the Downs at Dalby and leaves it past Roma at Mitchell on its way to Charleville. At the township of Miles between Dalby and Roma you'll find the Miles Historical Museum and  more than 20 old buildings in a recreated township. Miles was originally known as Dogwood Crossing and like many of settlements in the area was established on a track blazed by Ludwig Leichhardt.

Another historic experience waits outside the town at Possum Park where accommodation is offered in historic underground bunkers and restored troop carriers.

The Leichhardt Highway, named after the explorer, begins in Victoria and enters Queensland at Goondiwindi and then heads north east across the state to the Capricorn Coast. Travelling north, take a left turn at the tiny settlement of The Gums and you'll come to Glenmorgan and Monty's Garage, a 1940s style auto garage which is now a Vintage Car Museum. While in town railways buffs should visit the End of the Line display in the Glenmorgan Railway Station. Gardeners and naturalists will also enjoy a visit to the nearby Myall Park Botanic Garden, one of Australia's oldest collections of arid and semi-arid native plants and the birthplace of the Grevillia plant "Robyn Gordon".

Goondiwindi, locally known as Gundy, is the start of the Gore Highway which runs for 210km from the Western to the Darling Downs through a rich patchwork of farming landscape. The area around Goondiwindi was settled in the 1840s by pastoralists and by the middle of that century had become an important administrative and commercial centre. The town is still most famous as the home of champion racehorse, Gunsynd, affectionately nicknamed the 'Goondiwindi Grey'.