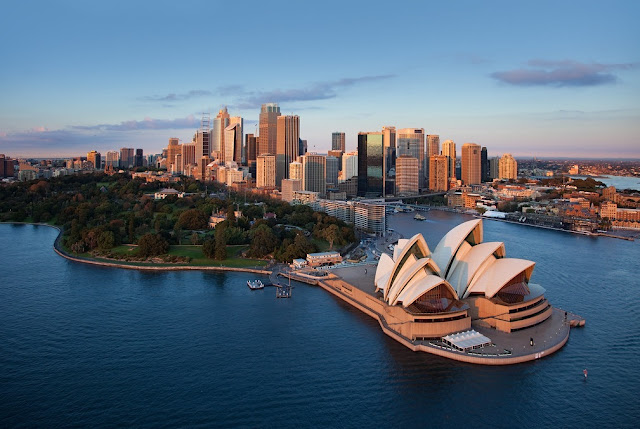 So much of Australia is flat. You can travel hundreds of kilometres without noticing any appreciable change in the terrain. This is because it is an old continent worn down over millions of years by the forces of nature, the centre being gradually transformed into a vast plateau of arid and semi-arid land with little vegetation and a parched, mainly red soil.

Fifty-five million years ago Australia was part of a super-continent known Gondwanaland which included South America, Africa, Madagascar, India, New Zealand and New Guinea. This landmass began to move across the Indian Ocean towards Asia, where 15 million years later it met the South-East Asian continental shelf and separated, thus creating the New Guinea Highlands and the lofty Himalayan ranges. It is in fact still on the move at a rate of several centimetres a vear.

With a surface area of 7,686,850 square kilometres and stretching 4025 kilometres from east to west and 3330 kilometres north to south, Australia is larger than Europe, excluding Russia and of similar size to the US mainland.

The greatest diversity of landscape occurs in the coastal belt of the east and south-east and in the north and north-west. All along the eastern fringe of the continent, a chain of highland stretches for more than 4000 kilometres from Cape York in the far north to Cape Howe in the far south. This is the Great Dividing Range.

The Range is an uplifted landform dissected by rivers into deep valleys and gorges that made early attempts to cross the Blue Mountains impossible. Further south the Snowy Mountains area is the main alpine region with the tallest peaks in the country, the highest being Mount Kosciuszko, at 2300 metres.

In the hot desert and semi-deserts there are impressive hills and plateaux whose modest heights are exaggerated by the flatness of the surrounding land. These include the Flinders Ranges in South Australia and Kata Tjuta (the Olgas) and Uluru (Ayers Rock) in the Red Centre

Not only is Australia a land of low rainfall, it is also a land across which the rain Calls inequitably. More of it drops on the eastern slopes of the mountain ranges than anywhere else and is mainly responsible for the tropical rainforests, the lush grasslands and the thriving habitations stretching from northern Queensland to the furthest southern point. Whereas the interior's meagre annual share is supplemented only every few years by torrential downpours which produce unwanted flooding and a variety of other problems

Australia is also a hot land. Its temperatures though are moderated by the absence of extensive mountain ranges and by the presence of surrounding oceans. Sharp variations, however, do occur between and within areas, such as between Darwin's average 34°C and the south-east's alpine average of 2 deg C, and between the inland's winter daytime and night time temperatures.

Since European settlement began in 1788 Australia has become a multi-cultural continent with over sixty different nationalities blending together to form a unique Australian character. With the majority of people preferring to settle along the coastal regions, Australia is one of the most urbanised countries in the world.

When travelling inland, the most enjoyable time would be between June and October when the warm days, cool nights and soft spring rains result in the landscape being covered with masses of wildflowers.

The northern tropical regions, while having a pleasant climate, especially along the coastal areas, can suddenly be transformed into a quagmire after rains, particularly along unsealed and seldom used roads. It is therefore preferable to travel in the dry season, which are the winter months.

Recent figures supplied by the Australian Bureau of Statistics show that Australia's population recorded in December 2018 reached 25 million with about 250000 (1.4 %) being Aboriginal, and approximately four million (20.8 %) of the total from other countries, of which 35 per cent originated from the United Kingdom and Ireland.