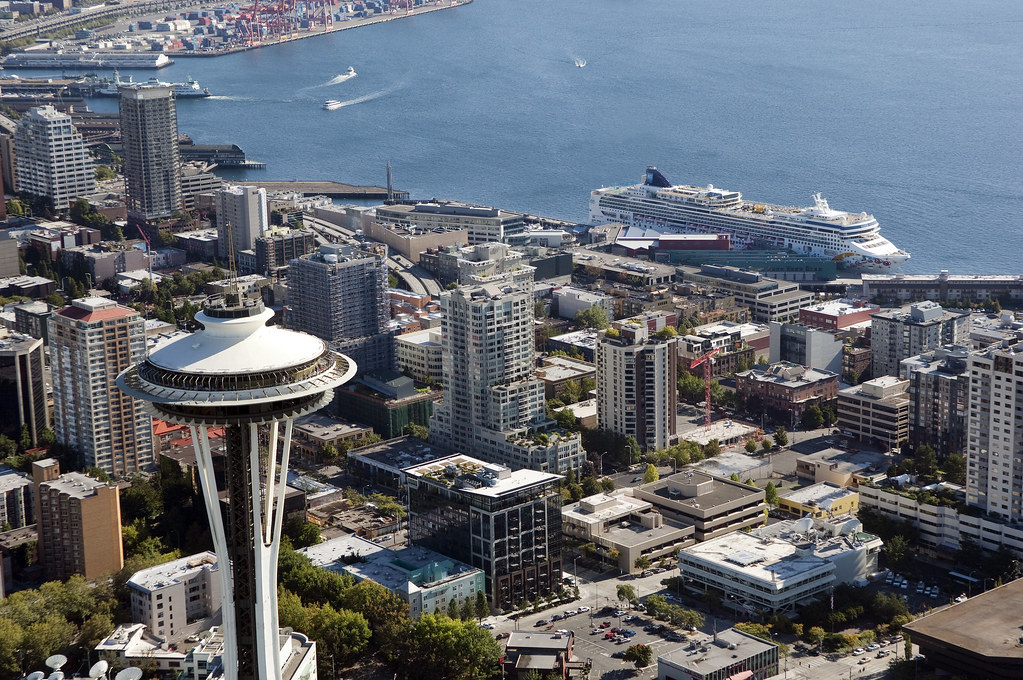 FROM TALL TIMBER TO HIGH TECH

What might have happened if Seattle had retained the original name bestowed by its first pioneers, "New York - Alki?" Would we now be nicknamed "The Little Apple" instead of the "Emerald City?"

The little party of pioneers from Illinois who landed on Alki Point on a cold and rainy November 13, 1851 had thought to bestow lofty ambitions on their tiny community of log cabins when they named it after New York. They soon changed the name to Seattle, after the local Indian Chief Sealth, and moved it to its present location on the deep waters of Elliott Bay.

British Royal Navy Captain George Vancouver had explored Puget Sound more than a half-century earlier when he sailed to its farthest reaches aboard the sloop H.M.S. Discovery. Giving just about everything in sight an English name (Mt. Rainier, for example), Vancouver honored many of his friends and paid many a political debt.

During the last half of the 19th century, the soggy little city on Puget Sound gradually grew beyond its tide flats waterfront and its mud streets to become a major port of call for ships plying the Pacific Coast. The surrounding hills and islands furnished thousands of shiploads of lumber for a growing San Francisco and the California gold mines. The term "skid road," meaning an unsavory part of town, originated in Seattle from the route (Yesler Way) down which logs were skidded from the hills to the waterfront.

South of the road, brothels and saloons thrived; the respectable part of town began north of the road. The Northern Pacific Railroad was completed to Tacoma in 1887, connecting Puget Sound to the East. The competing Great Northern Railroad arrived in Seattle five years later.

The arrival of the steamer Portland in 1897 with a "ton of gold" from the Klondike signaled Seattle's metamorphosis from grubby little waterfront town to primary commercial, shipping and marketing center of the Pacific Northwest it is today. The city served as outfitter, ship builder and transshipment port for the thousands of prospectors and millions of tons of goods heading north to the gold rush.

Seattle hosted the first of several world's fairs held in the Pacific Northwest when the Alaska-Yukon-Pacific Exhibition opened in 1909. Much of the present campus of the University of Washington is a legacy of that event.

During the next three decades, strikes, labor unrest and a strong union movement kept Seattle in the national news.

With the advent of World War II, Seattle boomed, as did most cities in the U.S. Puget Sound became a major naval base; tens of thousands of troops received their training at nearby Fort Lewis and shipped overseas from Seattle's waterfront. The Boeing Company, a small airplane manufacturer founded in 1910, grew to become the primary manufacturer of heavy bombers flown by the U.S. Army Air Force, the B-17 and B-29. The Museum of Flight, part of which is housed in the original Boeing factory building, traces this story.

Boeing figured prominently in the post-war era, introducing America's first passenger jet (the 707) to commercial aviation in 1959. By 1957 The Boeing Company and its suppliers accounted for nearly half of all the jobs in King County. In the 1960s the company gained its leadership as the world's leading manufacturer of commercial jet aircraft, a lead it still holds.


The 1962 Seattle World's Fair signaled a renaissance in the Pacific Northwest that saw it emerge as a major tourist destination and one of the country's most livable cities. The economy changed as well. Forestry, fisheries and agriculture gradually declined in importance while computer software manufacturers, bio-medical industries, and aerospace came to dominate the economy. With its proximity to the Pacific Rim, extensive port facilities, high-tech and communications industries and educational institutions, Seattle has assumed the role of a primary participant in the trade and commerce with Asia that will lead the economy into the 21st century.

The Great Migration - what you need to know

There is any number of amazing sights and attractions to see and do on an African safari, but witnessing the Great Migration is usually high on most travellers' wish lists.

And this is hardly a surprise. The Great Migration is undoubtedly one of Nature's most unforgettable spectacles: 1.5 million wildebeest accompanied by 200,000 or so zebras engaged in a never-ending journey, following the rains in a circular 1,200-mile route, through a wilderness that takes in the Serengeti National Park in Tanzania and Kenya's Masai Mara Game Reserve.

For anyone thinking of undertaking an African safari to Tanzania or Kenya, a luxury boutique safari operator has put together a quick checklist of everything you need to know about the Great Migration to make you get the most out of your trip.

What is the Great Migration?

First of all, it's important to understand that the Great Migration is an on-going event, which doesn't ever really end. Basically, it's a circular grazing path determined by the availability of food. Literally, hundreds of thousands of wildebeest and zebra start in Tanzania's Serengeti in January where they give birth to their young. The grass is still short in this part of the Serengeti, making it safer for the new-borns to stay protected from lurking predators. As the rains end, the herds start to move westwards, following the rivers on their way to the Masai Mara in Kenya. In summer they finally arrive, crossing crocodile-infested rivers to get there. And in the late autumn and winter, the herds move back towards the Serengeti, chasing the rainy season, and the process begins again. In essence, it's a year-long search for food, water and safety, and there are countless opportunities for safari-goers to witness all the beauty and drama along the way.

The major players on the Great Migration are undoubtedly the wildebeest, almost 1.5 million of them. And if you head out on safari in the first few months of the year, you'll be guaranteed to see an awful lot of them.

Travelling alongside the wildebeest are hundreds of thousands of zebra. And it turns out there's a very good reason for this: zebra eat the longer grasses leaving wildebeest the shorter grasses, which they prefer. Zebra are also helpful in remembering the course of the Migration, and keep a look out for hungry river predators. Wildebeest return the favour by employing their incredible sense of smell to locate water sources almost every day of the Migration. But of course, there's plenty other game to see as well including gazelles, elephants, lions, leopards and cheetah – all part of the migratory entourage.

So, if you go on safari during the Great Migration, as well as witnessing this incredible natural wonder, expect to see all of the animals typical to the African savannah.

The best way to see the Great Migration

One commonly held misconception is that all the wildebeests and zebras migrate together at the same time. Clearly given the huge numbers of creatures involved, the reality is quite different.

One of the best ways to see the Great Migration is from the safety of a safari vehicle. And depending on the time of year, expect to stop and watch as hundreds, if not thousands, of animals run across the road, spurred by a primal need to move and eat. But to fully appreciate the immense scale of the Migration it's hard to beat a hot air balloon ride at dawn across the Serengeti, with endless herds of migratory wildebeest and zebra spread out below as far as the eye can see.

Another important element that can really elevate any safari experience is where you spend the night. So much more than just a place to lay your head, tented camps and lodges are an integral part of any safari. Stay at one of the remarkable properties located in some of the most beautiful and remote parts of Tanzania and Kenya, which make an ideal base from which to explore the local wildlife and to observe the Great Migration at close range. One of these, Sanctuary Kichakani Migration Camp, is a special mobile-tented camp devoted entirely to the Great Migration, which moves as the herds move, transitioning from the Western to the Northern and finally the Southern part of the Serengeti throughout the year. This means that you won't miss anything, no matter what time of year you choose to travel.