Settlement and Exploration of Australia 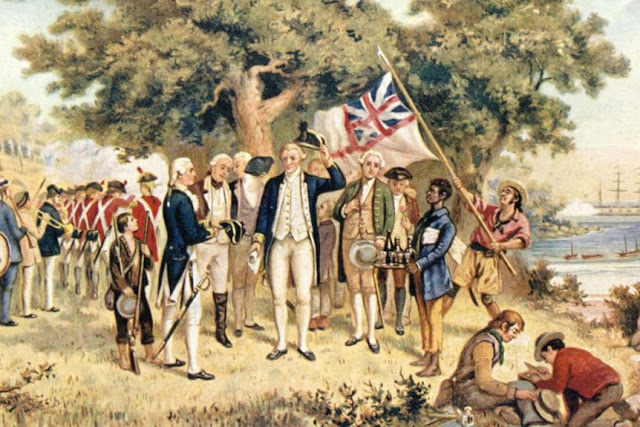 After having landed at Botany Bay on 29 April 1770, Lt. James Cook sailed north to the coast's most northern point at Cape York. Having completed the mapping of the coastline begun by the Dutch, Cook had exposed Australia as a gigantic island continent. On 23 August, he formally raised the Union Jack and claimed the east coast of Australia on behalf of the  British Crown.

The first penal colonists arrived at Port Jackson on 26 January 1788 under the command of Captain Arthur Phillip who became the colony's first Governor, In the early years the tiny settlement struggled to survive. The infertile soil, unsuitable for cultivation, forced the settlers to explore new land to the west round Parramatta were they established crop farming.

By the early nineteenth century more land was needed for cultivation and the rearing of sheep to meet the overseas demand for the now renowned high-quality Australian Merino wool. The colony expanded west by the crossing of the Blue Mountains in 1813 by explorers Blaxland, Wentworth and Lawson and further exploration as far as Bathurst by George Evans, John Oxley and Allan Cunningham opened up settlement to the north, the latter forging an inland route to New England in 1823 and in 1827 to the Darling Downs.

In the south, Hamilton Hume discovered the fertile grass plains around Yass and joined William Hovell in October 1828 to explore for rich pastures in Victoria, discovering the Murray River on the way, while in 1835 John Batman's purchase of 250,000 hectares of Aboriginal and led to the founding of Melbourne.

The period from the 1840s.to the early 1860s witnessed a number of remarkable expeditions. Edward John Eyre crossed the Nullarbor and reached Albany in 1841. Ludwig Leichhardt led a party through central Queensland to Cape York in 1844, opening up eastern and central Queensland to settlement and clearing the way to the north in the 1850s and 1860s.

In the same year Charles Sturt, possessed by a vision of a vast inland sea marched out of Adelaide at the head of an expedition to the north. Here he discovered the desert now known as Sturts Stony Desert and reached the fringes of the Simpson Desert before being forced back to Adelaide

The challenge of a crossing of the continent from south to north led to the epic journey, and ultimately, the tragic deaths of Burke and Wills who, in 1860 left Melbourne on an expedition financed by the Victorian public. They came within 50 kilometres of the Gulf of Carpentaria, but on their return to Cooper Creek they lost one of their party, Gray through dysentery and not long afterwards both Burke and Wills perished. In July 1862. John McDouall Stuart's successful third attempt at south to north crossing made way for the construction of the telegraph line from Darwin to  Adelaide.