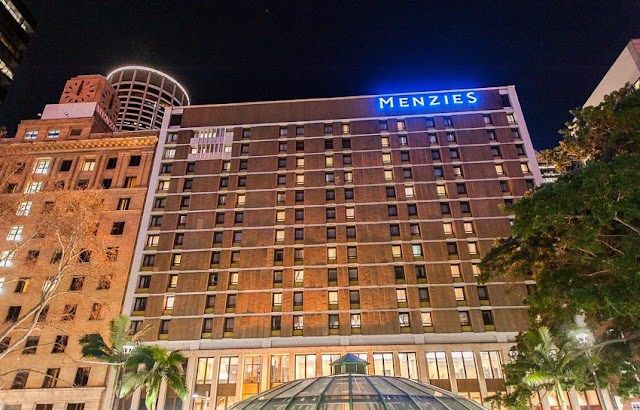 Sydney's Menzies Hotel was opened on 17th October 1963, by Premier R.J. Heffron and named after Sir Archibald Menzies, a pioneer in Australian hotels.


The hotel build cost was 2.5 million pounds with 260 rooms and suites. The hotel also boasted luxurious restaurants, lounges and cocktail bars, and was the first international hotel in central Sydney since the late 1930s. Deep in the century-old hotel basements are former railway workshops and other items of archaeological significance.


It wasn't long before an invitation to the Menzies' Emperor Room on the hotel's first floor became a much-coveted after-dinner date. The plush space could accommodate 500 seated guests on tiered floors overlooking the dance floor.  Big-name cabaret artists, entertainers and musicians performed every evening against the backdrop of the restaurant's ornate Roman purple and gold decor. Ice skating stars even displayed their talents on the hotel's elaborate and permanent, retractable ice rink.

The popular functions and conferences space on the second-floor ballroom saw the 1964 Beach Boys Press Conference. The excited staff even themed the room with sand from Nielsen Park, along with cushions and palm trees. While the event itself was a standout success, with the Beach Boys singing all day, gritty sand remained underfoot for several months afterwards.


By the late '60s, The Emperor Room had transformed to The Spanish Room and, due to the overwhelming popularity of dining at The Menzies, the number of hotel restaurants grew to include The Coffee Shop, Park Lounge, Blue Room, The Piano Bar, Keller and Fjord Room.  The Keller became a Sydney hub for the swinging '60s and was one of the first Sydney nightsclubs to feature exciting Go-Go dancers as an entertainment feature.

In 1972 The Menzies opened an on-premises Japanese restaurant, The Keisan, a Sydney hotel first.

By the mid-'70s The Menzies became the state's largest liquor licensee. More than 18 bars in and around the Wynyard precinct served more alcohol than anywhere else in the state at that time.

Adjacent to The Menzies was the office building, Shell House. It was incorporated into the hotel in 1979, adding almost 200 extra rooms and creating the North Wing. Constructed in 1938, converting the offices of heritage-listed Shell House to hotel rooms was a formidable task.

In February 1986, The Menzies Hotel joined the worldwide Holiday Inn accommodation chain. Then in  February 1996, the hotel became part of an Australian domestic hotel group, All Seasons. Finally, it was in March 2000 that the hotel joined the French Accor chain and was renamed to the simplified The Menzies Sydney Hotel, an Accor hotel in mid-2004.

In a sad final chapter, The Menzies Hotel demolition began in 2017 to make way for the Brookfield Partners' 27-storey Wynyard Place tower. Sydneysiders caught a short-lived glimpse of the old Shell signage before scaffolding obscured the site yet again.