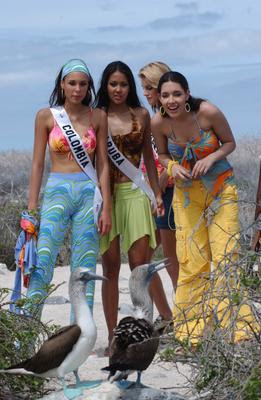 The recent Miss Universe competition has the put the spotlight on the tiny South American nation of Ecuador, and with our own Jennifer Hawkins triumphing in the coveted title, Australians are now in no doubt about the little nation’s cultural and natural allure.

Sydney’s Adventure Associates, coincidently located in the same part of Sydney as our new Miss Universe (Bondi Junction), has offered travel packages to Ecuador and the Galapagos for over thirty years.

Over 600 million television viewers witnessed the event that included a comprehensive coverage of Ecuador’s many tourism, cultural and natural attractions and included a declaration by the event’s compere and entertainment journalist, Billy Bush, that the Galapagos Islands were “a wildlife adventure of a lifetime.”

A part of Ecuador since 1832, and world-renowned as one of our planet’s foremost natural treasures, the Galapagos Islands were declared a national park in 1959. A “mecca” for naturalists since Charles Darwin spent five weeks there in 1835, the Galapagos Islands and Quito were amongst the very first sites chosen by UNESCO for World Heritage listing in 1978.