The Battle of the Coral Sea

The following account is drawn from the pages of PARADE (#186 May 1966), a popular Australian 'pulp' magazine published from 1946 to 1981 featuring a mix of historical, sensational and 'unbelievable' stories. The following account of The Battle of the Coral Sea is interesting in that it perpetuates the myth of the impending Japanese invasion of Australia since disproven as wartime propaganda.

I have retained the text as is but replaced the images with those of higher quality and added links for further research.

THE BATTLE OF THE CORAL SEA

AT 11am on May 7, 1942, 24 years ago, the first bombs whistle down in the Battle of the Coral Sea, the epic naval action which marked the turn of the tide in the Pacific War and probably saved Australia from invasion by the Japanese.

For three days, while a massive enemy invasion fleet steamed towards the Torres Strait. US and Japanese carrier forces had hunted each other over the rain-lashed ocean between New Guinea and the Solomon Islands

When the battle ended at nightfall on May 8 the Americans had lost the 30,000-ton carrier Lexington, two other ships, 66 planes and 545 men.

The price was high but it was not paid in vain. Crippled by much heavier losses, the Japanese invasion fleet wheeled away in full retreat. Never again did Port Moresby or the northern coast of Australia face the peril of seaborne landings.

The Coral Sea battle began a revolution in theories of naval warfare. For the first time in history, a major action was fought entirely by carrier-based aircraft. While the battle raged over hundreds of miles of ocean the rival warships never once came within gun range.

BY the end of March 1942 the Japanese had achieved all their preliminary objectives in their march of conquest in the south-west Pacific.

US naval power was temporarily shattered by the holocaust of Pearl Harbor, and Malaya, the Philippines and the East Indies had been over-run. Japanese army spearheads were pushing into northern New Guinea and the Solomons.

To consolidate their spectacular gains the Tokyo warlords knew they must isolate and possibly invade Australia before the Americans could establish bases for a counter-offensive.

They planned a two-pronged thrust -one to occupy the whole chain of the Solomons, the other to seize Port Moresby and threaten a massive onslaught on the Australian mainland.

Unknown to Tokyo, the Allies had already cracked the Japanese naval code. They knew the blows were coming. The Commander-in-Chief Pacific, Admiral Chester Nimitz (who died this year), organised every available unit of the US and Australian navies to meet them.

On May 1 Rear-Admiral Frank Fletcher's squadron united at its rendezvous in the Coral Sea. It seemed a meagre force compared with the strength Japan could send into the area.

The American admiral had two aircraft carriers, the Yorktown and the Lexington, six US cruisers, the Australian cruisers Australia and Hobart, and a handful of destroyers and supply vessels.

Fletcher's main hope was that the enemy would divide his forces so he could deal with them piecemeal. That was precisely what Admiral Shigeyoshi Inouye had been forced to do.

When the Japanese fleet sailed from Truk, in the Carolines, it consisted of three carriers, 13 cruisers, 32 destroyers and 14 transports packed with troops for the twin invasion projects, Inouye ordered the carrier Shoho and escort warships to cover the Solomons landing at Tulagi, then steer west to protect the other convoy as it rounded the tip of New Guinea towards Port Moresby.

Meanwhile, the main striking force centred around the larger carriers Shokaku and Zuikaku, was to lure Fletcher's squadron into action in the Coral Sea and annihilate it.

News that the Japanese armada was at sea caused tension and anxiety at Allied headquarters in Australia. Everyone realised that a crisis in the Pacific War had arrived.

Only Fletcher's thin shield of warships and aircraft, now patrolling amid blinding rain squalls in the Coral Sea, stood between Australia and invasion. Any hour might bring the showdown.

On May 3, a lone US scout plane broke through the rain clouds and saw the advance guard of the Japanese army streaming ashore on the white beaches of Tulagi, in the Solomons.

Boldly dividing his meagre force, Admiral Fletcher sent the Yorktown steaming at full speed northward throughout the night. At dawn his bombers and torpedo planes struck,

WAVE after wave of aircraft roared off the Yorktown's deck to blast landing craft and supply dumps while the Japanese scattered into the bomb-splintered coconut palms along the beach.

When the attack ended four Japanese warships and six other vessels had been sunk or driven ashore. A cloud of oily smoke rolled up from the devastated waterfront of Tulagi.

Having struck a lightning blow at one Japanese invasion prong, Fletcher hastened to reunite his ships. He was still uncertain of the position of the main Japanese battle squadron.

For the next three days, a grim hide-and-seek went on as reconnaissance planes from both sides dodged through clouds and rainstorms.

Inouye, with his two big carriers, was steering a circuitous course down the eastern side of the Solomons with the object of luring the American ships as far as possible from New Guinea.

The Port Moresby invasion flotilla had sailed from Rabaul on May 4. The Japanese admiral had to divert attention from the slow-moving, vulnerable transports creeping southward towards the tip of New Guinea.

But Allied Intelligence kept Fletcher fully informed of what was going on. Despite the looming threat of Inouye's approach he again daringly split his outnumbered forces.

At daybreak on May 7 he sent Rear Admiral Crace with three cruisers (including the HMAS Australia and the Hobart) and three destroyers to the westward to hunt for the Port Moresby invaders.

This meant stripping the Yorktown and Lexington of nearly half their escort ships. Fletcher knew he was dicing with fate but he had to stop the Japanese from entering Torres Strait.

Two hours later came the news for which the US seamen and pilots were waiting. The curtain was about to ring up on the Battle of the Coral Sea.

A scouting plane had sighted a Japanese carrier, two cruisers and two destroyers off Misima Island.

THE carrier was the 12,000-ton Soho, hastening to give air cover to the ships bound for Port Moresby. She did not reach her rendezvous.

By 10 am nearly 100 aircraft had thundered off the rolling, rain-washed decks of the Yorktown and the Lexington. From every direction, they swooped on the wildly zig-zagging Japanese ships. The cruisers and destroyers got away.

But there was no escape for the less manoeuvrable carrier. In half an hour she took 13 bombs and seven torpedoes. Listing heavily, her upper works a tangle of wreckage and with flames leaping from great rents in her hull, the Shoho crawled in a slow circle like a wounded beast, rolled on her side and sank.

Meanwhile, 100 miles away, the enemy was hitting back. While the Shoho was in her death agonies a Japanese pilot spotted the US destroyer Sims and the fleet oiler Neosho. Admiral Inouye sent his planes.

Hit three times, the Sims broke in half and went down with almost all her crew. Survivors of the burning and crippled Neosho clung to the hulk for four days before they were rescued.

As daylight was fading on May 7, 27 picked Japanese pilots set out to find the American carriers. Only six returned.

Nine enemy bombers were shot out of the sky by American interceptor planes. Ten more crashed into the sea when they tried to land on their carriers in the rainy darkness.

The fate of the remaining two victims provided one of the grimmest incidents of the Coral Sea battle. Mistaking the Yorktown for one of their own ships, the Japanese pilots came in to land on the American carrier and were ripped to pieces by anti-aircraft fire before they hit the flight deck. 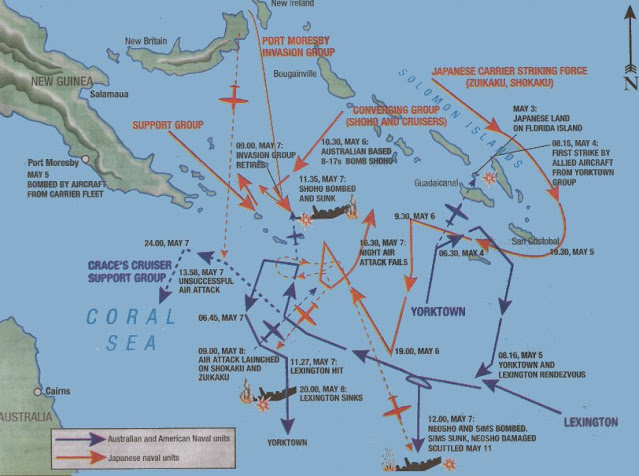 The events of May 7, however, were a mere prelude to the main contest. Next morning brought the clash of the heavyweights as planes from both sides discovered the battle fleets almost simultaneously.

By 10 am, with the American and Japanese ships little more than 150 miles apart, a swarm of 220 bombers, torpedo planes and fighters was in the air.

As the first wave of Americans roar ed in they saw the Zuikaku disappear ing behind a curtain of rain. Cursing their luck, they wheeled away to concentrate on the other big carrier, the Shokaku.

All the torpedoes missed, but two 500lb. bombs smashed through the flight deck and exploded in volcanoes of smoke and flame.

Before the Americans left, the Shokaku had been hit six times. On fire, filled with suffocating smoke and with her flight deck unusable, she was ordered to quit the battle and return to the Japanese base at Truk.

The Zuikaku, steaming northward at full speed with her escort warships, escaped unscathed. But she, too, had been driven from the scene of conflict.

Meanwhile, the Japanese blow had fallen on Admiral Fletcher's own carriers.

One heavy bomb ploughed its way into the vitals of the Yorktown and exploded with terrible effect, killing or wounding 50 men in the bloody shambles between decks.

Twisting away at full speed, the Yorktown evaded the next waves of Japanese, but her manoeuvres laid the 30,000 ton Lexington open to the full fury of the onslaught.

THE ring of escort ships round the two carriers was broken. Through gaps in the curtain of anti-aircraft fire, Japanese torpedo bombers screamed in towards the Lexington.

Five torpedoes smashed into the great ship's hull in quick succession. With her guns still spitting defiantly, she listed heavily as water flooded into her main boiler rooms.

Below in a hell of choking fumes, smoke and intolerable heat, her crew worked like demons to keep her afloat so that her planes could find a safe landing.

Their heroic efforts were in vain. Three hours later, as terrible explosions racked the Lexington from end to end, the survivors abandoned her.

That night an American destroyer finished her off with five torpedoes.

By then the Battle of the Coral Sea was over. The Japanese had lost 80 planes and about 900 men. In the American squadron 545 men were dead and 66 aircraft lost.

Appalled by his casualties and no longer able to provide adequate air cover, Admiral Inouye ordered the Port Moresby invasion fleet back to Rabaul.

Both sides claimed a victory. But, for the first time, the irresistible tide of Japanese conquest had been checked. The shape of things to come had been forged in the Coral Sea.