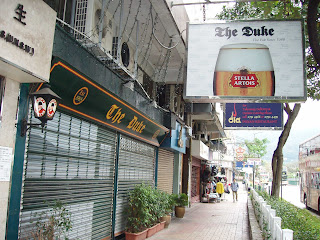 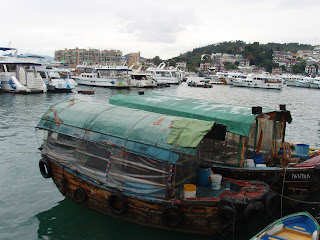 Flying into Hong Kong is not nearly as exciting as it used to be when
your flight took you through the frighteningly narrow corridor between
the steel and glass towers of the Kowloon Peninsula to Kai Tak
airport.

Nowadays, the flight path goes elsewhere into the excruciatingly
modern Chek Lap Kok airport on Lantau Island but as the Cathay Pacific
flight attendant Sue Li Kim said as my recent flight circled before
landing, " You get a less thrilling experience but a really pleasant
view over Hong Kong's harbour townships.

As we approached Chek Lap Lok, she added, "There you can still get a
close up view of Hong Kong. I can just see the block of apartments I
live in at Sai Kung".

The fishing village less than an hour from downtown Tsim Shat Sui, the
heart of Hong Kong's shopping district, Sai Kung is a popular
residential area for ex-patriates and Cathay Pacific crew.

It is also home to the unique Duke Hotel, formerly the Duke of York
Hotel, which is something of a home-away-from home for foreign
residents, particularly those from Australia and the United Kingdom.

Saturday afternoon at the Duke is very like Saturday afternoon at any
pub in Waterloo, Carlton or Fortitude Valley. With the Fosters flowing
and the noise level rising, punters huddled over a form guide and
drinkers arguing about football it was a far cry from the tranquil
fishing village outside.

It used to be called the Duke of York but as one quite well-indulged
patron, perhaps unkindly, noted "the old name might have been
reflecting poorly on the establishment."

On the other hand remnants of Anglicanism may have been discarded when
the territory was handed back to the mainland Chinese Government.

Against a background of fishing boats bobbing at the wharf, lines of
stalls selling everything from shrimp to shark and a host of Chinese
cafes the Duke is something of a surprise.

With Hong Kong's great transport system getting around is easy – and
cheap – even for non-Cantonese speaking Aussies.

Getting there is 20 minutes on the speedy, spotlessly-cleat MTR
underground rail way to Choi Hung will cost a couple of dollars and
then clearly-marked mini buses run down through the mountains to Sai
Kung.

Sai Kung is not alone as an escape hatch from the hustle and bustle on
downtown HK.

Only about 30 minutes by bus from Central you will find a beautiful
little beach called Sheko . Through the Island skyscrapers past the
Colonial mansions at Repulse Bay, Sheko's crystal clear water and
golden beach lined with stalls selling superb seafood and tasty dim
sum snacks is a world away from the swirling, brown waters of Hong
Kong Harbour.

Further out of town are a number of islands which retain much of the
lifestyle of China of old. Reaching them by chugging wooden-hulled
ferry from the Outlying Islands wharf, just along from the Star Ferry
bon the Hong Kong side, is a bit of an adventure in itself.

Have a vegetarian meal at the monastery on Lantau, explore the tiny
villages on Peng Chau and try some of the wonderful seafood
restaurants on Lamma.

Kowloon and Hong Kong Island remain the primary target for those who
like to shop there are plenty of options for those who don't.

Return economy fares vary seasonally from about $923 plus taxes
Australia wide. There are special offers from time to time, so it is
worthwhile checking with your travel agent or direct with Cathay
Pacific - 131-747 or visit

Wendy Wu Tours has a range of stopover packages in Hong Kong for
passengers travelling on to Europe or add-on deals for tourists
going to China. They range from about $296 for a two night stay with
transfers and sightseeing to about $1100 for a six night stay in
Hong Kong and Macau, with transfers, ferry trip and sightseeing.
Details from 1300-727-998 or visit www.wendywutours.com.au

THE Duke Pub: a friendly haven of Aussie beer, punting and footie arguments. 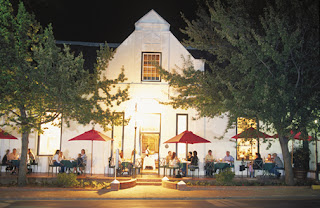 When Commander Jan Van Riebeeck planted the first grape vines at the
foot of Table Mountain in Cape Town in 1656 there were few who
imagined that South Africa would become a highly respected wine
producer.

There was good reason for the scepticism as the Dutch Free Burghers
were not blessed with great viticultural skills, but 20 years later
with the arrival of the Huguenots - many from well known wine regions
in France - things began to take a turn for the better.

These days South Africa has a fine international reputation for both
red and white table wines, not to speak of rich dessert wines and fine
sherries; and has turned its wine-growing areas into fascinating
tourist destinations to complement the natural wonders of Table
Mountain and the wild coastline running east from nearby Cape Town.

A close look at the four wine areas - Stellenbosch, Franschoek, Paarl
and Breede River- will take the connoisseur days, or even longer,
especially if one lingers is some of the splendid restaurants which
dot the countryside with frequency nearing that of the aged, shady
oaks which are practically the trade mark of the wine areas.

For the traveller who likes to maximise sightseeing the Stellenbosch
wine route has the added interest of the city after which the area is
named.

Of all the towns founded in the Cape by the Dutch East India Company,
Stellenbosch is the second oldest after Cape Town, and is one of the
best preserved in the whole of South Africa.

Know also affectionately known as Eikstad because of its proliferation
of graceful oak trees (some of which are declared national monuments,)
Stellenbosch is home to the finest examples of Cape Dutch architecture
to be found anywhere.

Now also a famous university city, it is the gateway to the wine
country and a virtual living museum. In the heart of the town on
Ryneveld Street is the recently completed Village Museum of six
restored houses, some of which date back to the late 1700's and all of
which are in the styles characteristic of several historical periods.

A military museum is housed in the Kruithuis (powder house) which was
built on the west side of the town in 1977 and in nearby Dorp Street
is the longest surviving row of houses in South Africa. All are more
than 100 years old and in splendid condition as modern residences.

Whether you're taking tea in the quaint Stellenbosch cafes, sitting
under shady pergolas at wineries or at tables in buildings of
yellow-wood beams, reed ceilings and Batavian floor tiles the cuisine
in this part of the Cape Province will invariably delay you.

Traditional Cape dishes, many referred to as Cape Malay, will be a
brand new experience, even for well travelled Australian palates.

Not to be missed is the smoorsnoek, a local salted fish, braised with
onions, potato and chilies, and bobotie a tangy curry of minced meat
baked slowly in the oven and topped with an egg custard. With the
right dedication of purpose one should then give serious consideration
to the Cape brandy puddings and melktert, a baked milk tart which will
appear on many a menu during your stay.

But, what is a splendid meal without the company of the region's
lifeblood - a glass a two of lush cabernet, some vintages of which
will remind Australians of our own robust red wines, or a finely
balanced white which many will find more reminiscent of German-style
whites.

There is ample opportunity for more of this at the scores of wineries
which hide among the giant oaks trees grouped around the rolling
plains with their craggy backdrop of shimmering grey mountains.

African holiday specialist Bench International has a range of packages
which include Cape Town and its nearby wine-growing areas. The area is
included in a 14-night Grand Tour of South Africa costing about $2400,
plus air fares from Australia. For travellers stopping off in Africa
on the way to Europe there's a three-night Cape Town package costing
from $720 including sightseeing. Details from Bench International
phone 02-9290-2877 or 1800-221-451 or visit
www.benchinternational.com.au

TABLE BAY nestles in the folds of Table Mountain that stands majestic
with its head and name-sake plateau in the clouds. 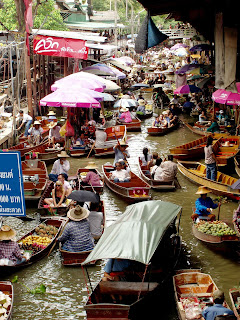 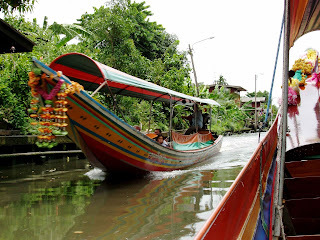 Aptly called "Venice of the East", the Thai capital of Bangkok and
its myriad waterways are a way of life for tens of thousands of
people and a community in many ways self-sufficient.

The Chao Phraya river and its klongs are the real highways of Bangkok
and provide visitors with the wonderful contrast of glistening gold
spires and the multi-tiered roofs of Buddhist temples and royal
palace and lines of simple timber floating houses.

The way to view both is from the timber-planked seats of a hong Yao
(noisy, long-tailed speedboats which constantly weave their way
through the rows of houses anchored by chains fastened to huge poles
driven into the waterbed.

Boats of all shapes and sizes are the universal means of transport,
communicating and trade with the predominant vessel flimsy-looking
but sturdy canoes of the klong peddlers who trade within the water
community.

The small skiffs are deftly maneuvered with a single paddle, usually
handled by one woman whose face is barely seen beneath a
broad-brimmed hat of palm leaves, but whose strident voice can be
heard bargaining with customers seeking her vegetables, fruit,
firewood and other produce.

Every now and again travellers through the klongs pass by a stilted
wooden house whose front veranda is a clutter of cooking utensils,
groceries, flowers and some mod. con. electrical goods, like hair
dryers and torches.

Despite these advances the people of the klongs are not yet up to
washing machines and the like. The women of the community are
generally seen doing the family washing in the water passing down the
klongs to the main river.

But the klongs have even greater uses for their inhabitants. The
cackle of children's laughter is never far away as the naked brown
bodies of the youngsters plunge in and out of the water delighting
each other as they splash the passing tourists.

Even a friendly splashing is preferable to the raucous, ear­splitting
crescendo in the capital's streets.

For while the speedboats with their tiny engine at the end of a long
pole to allow them to travel through shallow water also make a
terrible racket the noise is not so intrusive in the rural atmosphere
as in the streets lined with glass and concrete.

What's more the rules of navigation in the klongs are paid much more
attention than the heed paid by drivers to the rules of the road.

It is customary, moving through the klongs during the high water
season to see that many of the houses have hung a red flag - or
sometimes a scrap of red paper - in a prominent place to persuade
water craft to pass slowly to avoid washing water into the lower
quarters of the house.

In this water-dominated community older traditional houses now rub
shoulders with some of more modern design, not necessarily so
pleasing to the eye, but evidence that some Thais are re­discovering
the pleasures of life on the klongs.

The hong yao which leave the wharf near the Royal Orchid Sheraton
Hotel take tourists on a journey of a couple of hours which
culminates in a slow cruise back to the wharf on a converted rice
barge.

The entire tour costs about $25 and is a genuine bargain for an
insight into the water peoples' culture.

Adventure World has a three-night package at the four star Pathumwan
princess hotel for $392. It includes breakfast, airport transfers and
a half day temples tour and is valid for travel until March 31, 2008.
More details from 1300-363-055 or visit www.adventureworld.com.au

ALL klonged up: Bangkok's bustling river markets resound with banter
of trade between buyers and sellers.

COLOURFUL riverboat transport gets locals around these frenetic waterways.