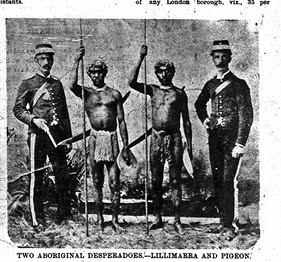 At Windjana Gorge on November 7, 1894 Jandamarra appeared on top of a rock and shot drovers Burke and Gibbs, Bunuba warriors seized the weapons and ammunition from their wagon.

In Derby the population of 60 demanded retribution. Special constables with 'discretionary powers' declared war against the rebellious uprising. Most Aboriginal people had seen family members slaughtered and chose to stay within the protective sanctuary of the pastoral homesteads.

An armed force of 28 entered the eastern entrance of Windjana Gorge, Bunuba and police exchanged fire over eight hours.

Jandamarra was shot three times. Over one hundred Bunuba men, women and children retreated under cover of Jandamarra's rifle fire.

Jandamarra hid in a cave at Windjana where he was nursed by his mother Jinny and wife Mayannie. When strong enough they walked to the greater safety here at Tunnel Creek where the cave entrances are hidden by boulders and shaded by trees.

The police retaliated with massacres of Bunuba people at Geikie Gorge, Margaret River, the foothills of the Leopold Range and within the Fitzroy Valley. Officially 84 were shot. Aboriginal descendants believe it to be several hundred between November 1894 and March 1895.

These killings triggered by the Windjana Gorge shoot-out weighed heavily upon Jandamarra. He changed tactics to non-violent resistance.

Note: You can visit historic Windjana Gorge with a tour from Kimberley Wild