Sounding more like a World War Two bomber than an age-old natural phenomenon, Iceberg B15a is nonetheless set on a course of destruction deep in the Antarctic.

Unlike their more creative meteorological colleagues, the (US) National Ice Center name bergs based on their geographical origin rather than use popular Christian names like, say, Gloria or Tracy. Anyway, what do you call an iceberg big enough to attract territorial claims? Goliath? Otto? Ymir? Or just Mr Big? 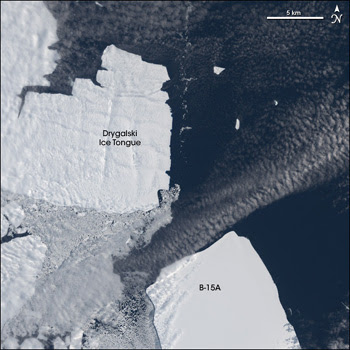 B15a’s story begins on the Ross Ice Shelf, a perpetually frozen sea the size of France that barricades a vast body of water all the way to within 600 kilometres of the South Pole. Favoured by polar explorers because of its pool-table flat terrain, the shelf allows even heavy vehicles to traverse its sturdy, ancient crust, which scientists know to be hundreds of metres thick.

In the Antarctic summer, between November and February, chunks of the shelf often “calve” off into the Southern Ocean thanks to the combined forces of melting when it reaches the marginally warmer waters and the numerous irrepressible glaciers shoving it brutally north. These chunks become icebergs that can float around the ocean for years along with the slabs of non-permanent ice that regularly bob about the Ross Sea during summer before melting away. Normally this icy debris is small, say the size of an apartment block or small suburb, but B15a sets a new benchmark; at 6,000 sq. km, it’s the size of Jamaica!

As a further mind-boggling twist, B15a gets its ‘a’ tag by virtue of the fact it was once part of an even larger floating mass; you guessed it, B15. At nearly 300 km long and ‘born’ in March 2000, B15 was probably the largest iceberg ever recorded, but has since disintegrated, leaving B15a as its largest remaining offspring.

Doomsayers are quick to jump on the global-warming issue as a cause for these floating behemoths, but in truth, the boffins are still scratching their heads.

“We don’t know why icebergs like B15 calve when they do. We don’t know whether there’s an environmental trigger,” said Doug MacAyeal, an iceberg researcher at the University of Chicago. “In the middle of the night something happens and you wake up the next morning and one of the cracks has connected through to make the piece come off.” Thanks Doug.

Viewed from space, B15a appears like a giant aircraft carrier making an awkward berth alongside an irregular dock. Part of this ‘dockside’ is the massive Drygalski Ice Tongue, a floating glacier jutting out almost 50 km into the Ross Sea. B15a’s clumsy manoeuvring had scientists literally on the edges of their lab stools, as it appeared certain the invisible skipper had set a course ‘dead ahead’ to collide with the giant ice tongue. Imminent impact was scheduled for about January 15.

As if lifted from a Hollywood action film script, the mega-berg came to a screeching halt just kilometres from the frozen mass. Apparently, the berg is now aground and stuck almost motionless within clear view of Drygalski’s giant ice pontoon. The world’s scientific community, no doubt, had trouble drawing breath again after such an astonishingly close call. So what now?

"This berg has wedged itself between two shallow areas. ... It really hasn't gotten any closer for a week now," said Antarctica New Zealand's science strategy manager, Dean Peterson, with a sigh "It's kind of shimmying back and forth now ... so I don't know whether it's ever going to get to the Drygalski or not." Thanks Dean.

Even though one significant geographic feature has been spared (for now), the stalled iceberg is not good news for the ecology or the self-exiled humans. McMurdo Sound is a tiny pocket on the hip of the Ross Ice Shelf, with the 3800m Mt Erebus looming large in the immediate scenery. The bottom end is sewn shut by the shelf and the US and NZ each keep a permanent base supplied with summer access by ship from the other. McMurdo Base (US), in turn, supplies by air the much more precariously located Amundsen-Scott Base over 1,000 km away at the South Pole itself. Problem is with an iceberg the size of a republic blockading the entrance, winter (non-permanent) ice can’t get out and ships can’t get in.

Forget for now the silly scientists cloistered away in their frozen bases and consider the plight of the two penguin species trying to raise their young in the midst of this upheaval. The world’s largest penguin, the Emperor, must navigate a hundred or more kilometres across the ice to reach their feeding grounds and then return with dinner for the young. That’s normal, but since B15a parked itself across the driveway, the trapped ice is doubling that distance. The smaller Adelie Penguins have a similar task, and the marathon distances are taking a toll.

Australian biologist, Jane Wilson, has just returned from the region aboard Adventure Associates' icebreaker, Kapitan Khlebnikov, and she reports vastly reduced numbers of Adelies and nests at Cape Royds due to the inaccessibility of the foraging grounds. It follows that the Emperors will be doing it tough too.

Global warming and ozone holes aside, the consensus amongst glaciologists (folks who study ice) is that the occasional whopper of an iceberg is normal for that part of the world. What would be of concern is if the permanent ice pack were actually receding, but for now, there appears no sign of that. Flippers crossed.