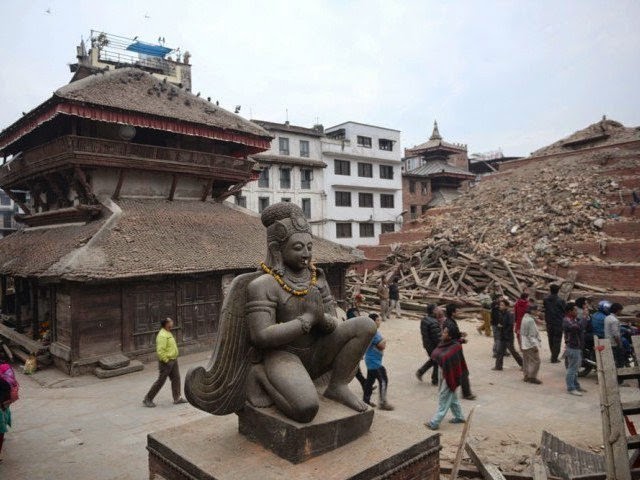 What started off as a normal day, turned into the biggest nightmare for the nation of Nepal as a regular Sunday afternoon was ravaged with nature’s fury. Hapless people fled from the rubbles they once called home and held on to their loved ones as the earth beneath them shook with unanticipated outrage. The earthquake was triggered by the India tectonic plate, which is moving northwards at the rate of 5cm a year into central Asia. This has resulted in thrust-faulting and has thrown up the Himalayan mountain range too.

The tiny, picturesque landscape of Nepal that is blessed with unparalleled beauty changed within seconds into an unrecognizable chaos that has left an imprint on not just its terrain but its very soul too.

Natural disasters snatch away a lot from us; our belongings, our pride, our ego and our confidence. They leave us vulnerable and with a confirmed realization that everything in life is only temporary. The sardonicism of life is such that horrific natural disasters have managed to get people and countries closer and have made us forget our differences and animosities; even if only for a moment. As people in Nepal pick up what is left of their lives and look for the frazzled remnants of their near and dear ones, the world has stood up to the catastrophe and nations are united in their efforts to salvage Nepal from this unprecedented tragedy.

The earthquake that measured 7.9 on the Richter scale has brought about not just wide spread destruction but has also highlighted newer, deeper challenges of sanitation, food, medicine and rehabilitation. Even as the people stranded in the country quiver with the possibility of fresh tremors or powerful aftershocks, Nepal is faced with a mammoth task of handling the much more difficult aftermath of a natural disaster.

Even though the response of help from all over the world has been overwhelming, Nepal can do with as much immediate assistance as possible. If you wish to help, you could donate anything; from money to blankets or even clothes if needed. But before you do, make sure it is through a reputable charity that has a presence in Nepal and that the item you are donating is what is actually required there.

A primarily tourist driven economy, the ramifications of the earthquake are going to stretch wide and far even after Nepal manages to stand back on its feet. A number of its prized tourist attractions have been reduced to dust and its major tourist puller; the Himalayas has seen devastating avalanches that have buried many a brave hearts beneath the snow. The Old town of Kathmandu that was known for its ancient, beautifully preserved architecture like the Dharahara Tower (a UNESCO World Heritage structure) was reduced to apile of broken bricks. Many other heritage structures have been destroyed including almost all the iconic religious buildings at Durbar square in Kathmandu.

Amid all the destruction, there are a lot of lessons hidden in this tragedy. It has forced us to come to terms with the fact that life is transitional in nature and that no matter how many riches we amass, it will never guarantee our security against a natural disaster of this magnitude. Somewhere down the line, we have forgotten to respect nature and its power to make and break life. Incidents like these remind us that man can rarely control a natural apocalypse or escape unscathed from its temper. It has taught us that life is more than the stuff we own or the luxuries that we buy and that living is really about co-existing with the world rather than trying to outshine our fellow citizens.

The earthquake might have shattered buildings and cracked roads, but the beauty of human nature is such that even when all is lost, there still remains a sliver of hope that slowly but surely life will come back to being as beautiful as it is. The battered spirit will rise up from the ashes and rebuild the foundation of a better world. Even though these scars will take time to heal, they will remind us of a time where we rose to our strongest self in the wake of weakest circumstances.

Nepal needs not just physical or financial support but also moral encouragement. Let’s come together in our prayers for those who have endured this terrible catastrophe and pray for the souls of those who couldn’t make it.