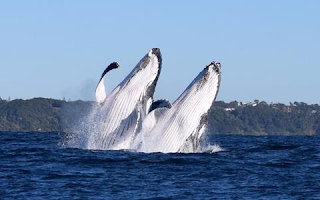 From May to November the waters along the NSW coastline become a living, moving spectacle as thousands of humpback, southern right, fin and other whale species make their way north. The NSW coastline becomes the world's best place for whale spotting and encounters, or to join the Saltwater Indigenous people celebrate this annual migration through Whale Dreaming ceremonies, festivals and experiences.

Destination NSW Chief Executive Officer Sandra Chipchase said, "Each year thousands of whales migrate north along the waters off the NSW coast, providing locals and visitors alike with the chance to see these majestic creatures up close and in their natural environment. It's exciting for young and old to spot a whale tail slapping or breaching its full body from the water".

"NSW has plenty of great whale watching experiences including fast boat cruises, lookouts and vantage points from stunning coastal walks, whale festivals and Whale Dreaming tours. With whale numbers increasing, it's not surprising that the State is often known as New South W(h)ales," she said.

The long association between Aboriginal people and whales is reflected along the NSW coast where rock art sites document the powerful relationship with these creatures. In fact, the whale is an important totem for numerous Aboriginal groups.

South Coast Indigenous Tourism Operator, Ngaran Ngaran Culture Awareness, runs Whale Dreaming Tours to explain the importance and significance of whales. Operator Dwayne Bannon-Harrison, a descendant of the Yuin people said, "The connection to saltwater and sea creatures is of utmost importance to many coastal First Nation's people. In our creation stories the whales are elders of the sea that once walked from the land into the ocean. Whale Dreaming Ceremonies sing the safe passage of the whale migration, and ensures the connection and respect continues on. We perform these ceremonies in May and October."

Other Whale Dreaming tours and events taking place along the NSW coast include: Unkya's Gurruuja Juun (Whale Tail) Tour, Five Lands Walk on the Central Coast on 24 June 2017, and Whale Dreamers Festival at Norah Head on the 2 July 2017.

In addition to the importance of Whale Dreaming during whale season, NSW is home to some top notch whale watching spots and experiences. Here are just a selection of some of the great whale experiences available in New South W(h)ales:

·         Ballina – On the North Coast, Ballina Head Lookout, located between Shelly and Lighthouse beaches, offers panoramic views over the sparkling blue water out to the Pacific Ocean. Enjoy the whale spotting from this headland or stroll down onto the surf patrolled beach and watch the whales go by as you swim or as you enjoy breakfast or lunch at the café above the surf club at Lighthouse Beach. Another great spot in Ballina is the Black Heading viewing platform, which is easily accessible on a short walk through an old growth littoral rainforest.

·         Iluka and Wolli – Iluka Bluff is a dedicated whale-watching platform that offers 360 degree views along the coast. While local tour operator Wooli Deep Sea Tours runs whale watching tours that includes cruising in the beautiful Solitary Island Marine Park, home to a rich diversity and abundance of sea life including dolphins and turtles.

·         Port Macquarie – Home to the second most easterly point in NSW, whale watching in Port Macquarie ensures close-up encounters just metres off the coast and tours that provide less travel time out to open ocean to find the whales. The 9km Coastal Walk from Town Beach to Lighthouse Beach hugs the coastline and offers stunning vantage points and a number of seats at different headlands along the way for whale watching encounters. For those looking for some adrenalin filled whale watching, Port Jet's Wave Rider can reach speeds of up to 100km/hr, making it one of the fastest commercial boats offering whale watching cruises.

·         Port Stephens - For land based whale watching, set out with your binoculars to locations like Tomaree Headland, Barry Park at Fingal Bay, Fishermans Bay, Birubi Point and Stockton Beach, but one of the favourite spots that offers great whale sightings is the Boat Harbour headland, off Noamunga Street. Look for a 'V' shaped puff of spray as the whale surfaces. Humpbacks are the most surface active of all the whales, so you might even see tail slaps, pectoral fin waves, body rolls and the mighty 'breach.'

·         Newcastle – Book at tour with NOVA Cruises, departing from Newcastle Harbour which is only a short trip out the heads and into open water to find the whales. For land based spotting in Newcastle try Shepherds Hill Lookout, a popular spot with the locals.

·         Lake Macquarie - With spectacular ocean views for most of the way, Caves Beach Walk is just the spot for whale watching, this picturesque coastal bushwalk traverses the cliff tops south from Caves Beach to secluded Pinny Beach in the Wallarah National Park. Also not to miss are the views from Redhead Bluff, a red rocky headland that offers views that stretch across the ocean and south over Nine Mile Beach towards Blacksmiths and Swansea. A prime whale watching location!

·         Jervis Bay - Jervis Bay marks the half way point for the 4000km whale migration, so it is no wonder many use the bay's waters as a resting point and a place for the newborn calves to learn, play and rest. Jervis Bay Wild provides whale watching tours that get you up close to these majestic animals as they enjoy the calm still waters of Jervis Bay. For land based viewing you can't go past Penguin Head at Culburra and the viewing platform in Booderee National Park, located at Cape St George Lighthouse.  Whales have also been spotted from Caves Beach in Booderee National Park, a popular camping spot.

·         Montague Island and Narooma – Narooma Charters runs regular whale watching tours to the stunning Montague Island which sits off the coast of Narooma. In recent years Southern Right Whales, Fin Whales, Brydes Whales, Sei Whales and Blue Whales have also all been seen off Narooma , as well as several sightings of the extremely rare albino humpbacks known as Migaloo and Mini Migaloo. In 2011 Mini Migaloo was photographed off the coast near Montague Island by Daryl Stuart of Narooma Charters, in a stunning lunging pose. The angle of this cheeky pose has been of great help to scientists in identifying the sex of Mini Migaloo. We believe in 2017, Mini Migaloo will be seven years old - not so mini anymore.

·         Broulee & Moruya Head – A top spot on the South Coast is Broulee Island at Broulee, which is joined to the mainland by a sandbar so is always accessible. Whales in season and dolphins all year round may be sighted from any side of the island which takes about an hour to walk around. Also not to miss is Toragy Point at Moruya Heads, this lookout offers whale watching views north along the coast and interpretive signage about whales and marine life.

·         Eden – Renowned as one of Australia's best spots for whale watching, Eden's calm Twofold Bay offers respite for the young calves before making their final leg of the journey south and is one of the few places in the world that Humpback Whales feed on their southern migration in Spring. The Eden Whale Festival, 3-5 November, is the perfect time to celebrate all things cetacean. The festival is the chance to get out on the water with Cat Balou or Freedom Charters for a sea based whale experience, join a land based whale spotting tour, visit the historic Davidson Whaling Station to hear about the strong history of Eden and its whales, as well as feast on local produce and enjoy entertainment, music and film.

To find out where the whales have been recently spotted and tips for great vantage points along the coast download the Wild About Whales app. Even better, you can even share and log your own sighting.