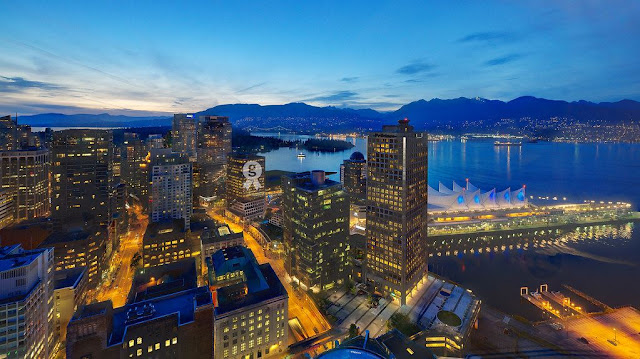 Vancouver is Canada’s most populous city on the west coast, and is arguably the most popular tourist destination in British Columbia, having hosted over 10 million visitors in 2016.

A popular filming location for Hollywood movies, Vancouver is close to the gorgeous mountainscape of the Canadian Rockies. With its exciting art, culture, and entertainment, the city offers a unique heritage as North America’s most ethnically diverse city.

Begin your foray into Vancouver by visiting these iconic attractions, recommended by our Pan Pacific Vancouver team.

Look for a big “W” on Vancouver’s horizon: it’s the new sign of its historic Woodward Building.

Originally built in 1903 and once North America’s biggest supermarket, this historic site has now become a residential and office complex housing downtown campuses of several leading Canadian universities. If you are sightseeing from the nearby Vancouver Lookout, you can see the entirety of the Woodward Building from the top down, plus a 360-degree view of Vancouver city.

Located at the University of British Columbia, UBC Botanical Gardens is Canada’s oldest university botanical garden, established over 100 years ago in 1916. Entry rates vary depending on which sections you are heading to: check its website for details. The garden’s traditionally Japanese-style Nitobe Memorial Garden is considered to be one of the most authentic Japanese gardens with a teahouse in North America.

Spread over one hectare of forest, the garden has each plant and stone carefully placed to emphasise harmony among natural elements. Cherry blossoms bloom in spring, irises in summer, and fiery maples in autumn.

3. The Heart of the City: Vancouver City Hall

Vancouver City Hall houses Vancouver City Council on 453 West 12th Avenue, and features a 12-floor tower. Completed in 1936, it was declared a schedule A heritage building in 1976.

Snap a photo of the statue of Captain George Vancouver by renowned sculptor Charles Marega. Gracing the front of City Hall, it pays tribute to the 18th century English officer who charted the west coast of Canada and the Pacific Northwest of the US.

Thrilling visitors since 1889, Capilano Suspension Bridge is one of Canada’s most popular outdoor attractions.

Stay at the Pan Pacific Vancouver where you will be just a few steps away from the convention centre with panoramic views of the Coastal Mountains, Coal Harbour, and city landmarks in Vancouver. Pick a Pacific Club room or suite for club access and a host of privileges!