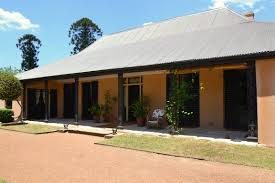 Two months after the First Fleet landed in Sydney Cove in 1788, it became obvious that the soil in the area would not produce sufficient crops to feed the infant settlement. Governor Arthur Phillip decided that it would be necessary to search for more suitable land if the colony were to survive.


On April 23rd, 1788 Phillip and a party of explorers discovered a suitable area and in September 1788 he announced his intention to found a settlement. On November 2nd, 1788 the Governor chose a site for the fort, barn, granary and other farm buildings.

Originally called Rose Hill, Phillip renamed the town PARRAMATTA on 4th June, 1791. It is said to mean "the place where the eels lie down". Another explanation is "the head of the river".

Most importantly it saw the start of Australia's wool industry.

Fortunately for Australia's history, many of the early colonial buildings have been restored and are open for inspection.

Parramatta is an exciting place to live or visit.

Many multi-million dollar projects are under construction including an international hotel, government office centres and shopping centres. A modern sports stadium has been completed and a cultural centre is planned for the near future.

You can enjoy many activities such as golf, squash, ten pin bowling and tennis or visit the historic Rosehill Racecourse which celebrated its Centenary in 1985.

Parramatta is a notable shopping centre, and has numerous fine restaurants catering for all tastes. A new Mall will make shopping even more relaxed and leisurely.

Parramatta is a prime example of blending the old with the new.