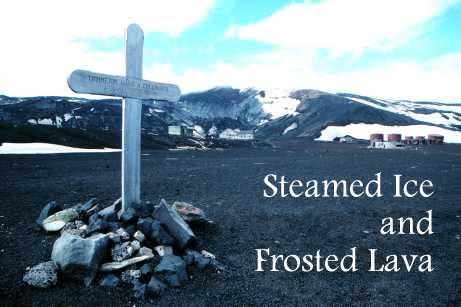 The approach to Deception Island is almost certainly the key to its name. As we neared its insanely steep and craggy cliffs populated by thousands of screeching, wheeling seabirds, Kapitan Kalashnikov, at the helm of the Akademik Sergey Vavilov, ordered dead slow and the 6,000 tonne vessel gradually and imperceptibly came to a crawl.

As the Vavilov bobbed gently on the brooding sea, I ducked in and out of the wheelhouse, alternately examining the maps on the plotting table and the entrance to Port Foster, slowly revealing itself in the 40cm window of the radar. Amid a stiff, whistling breeze, our ship slowly and precisely came about, lining itself up with a navigation marker now visible just inside the bay. 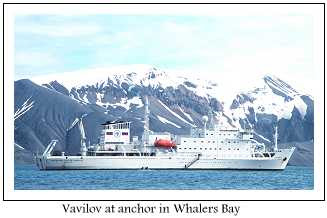 A picture of concentration, KK, flanked by his officers at the radar and depth-sounder, threaded the Vavilov through the eye of the needle that is Neptune's Bellows, a narrow chink in the encircling cliffs that form a natural bowl for the port. Deception Island is a dormant volcano with its peak imploded, forming a caldera that is now flooded by seawater that enters via Neptune's Bellows.

Once inside, the wind came to an abrupt stop and the sea flattened markedly. Like a stole of continuous, frosty ermine, a delicate yet opaque mist tantalisingly obscured the peaks of the protective ridge. But we are not alone. A yacht slips past the bow on its way to the open sea and an RN helicopter buzzes back and forth ferrying crew to a shore camp adjacent the abandoned whaling station and British Antarctic Survey (BAS) base. 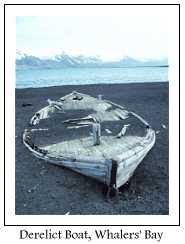 In mock invasion, we put ashore in front of the ghostly buildings weathered, not just by time, but by the ravages of several fierce eruptions in the late 1960s that ultimately led to the evacuation of the old facility. Originally set up at the turn of the century to shelter whalers and sealers, it quickly grew into a full-scale, if grossly inefficient, processing factory. Early whaling was messy and wasteful, and at one time it was reckoned that about 6,000 partly butchered, putrid beasts floated in the bay.

A small party set out to explore what was once an Operation Tabarin base. A precursor to BAS, Operation Tabarin was a secret British wartime activity that secured allied control of the southernmost regions and kept a lookout for Nazi Killer Whales and fascist penguins. The boredom amongst these poor, god-forsaken men must have been maddening.

Despite the savage incursion of molten lava and scorching volcanic ash, some portions of the old base are still in relatively good shape. Rations of scotch oats and canned pilchards remain intact, deep-frozen, in the old storehouse, while over in the hangar, a carefully dismembered floatplane appears to await restoration. 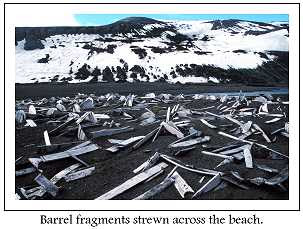 The old Norwegian whaling relics, on the other hand, are certainly on their last legs. Against the backdrop of stark, yet delicately frosted
peaks, bleached and busted barrels, orphaned metalwork and sundry detritus, mixed with randomly scattered whalebones, form an almost supernatural landscape. It's hard to imagine even the most Dadaistic artist producing a more effective "installation".

In a final act of indulgence, we made a quick flit around the headland to Pendulum Cove where the volcano's still-smouldering plug forces piping hot water up through narrow fissures along the shore. Our heavy kit was tossed off with gay abandon before we went tiptoeing to the steaming water's edge. The sensation is difficult to describe, but imagine your bum on a hot plate with your feet in ice water!

Deception Island is still popular with Governments who seek to maintain a presence in the Antarctic with several modest bases still sporadically occupied on the relatively safer western shore of Port Foster. 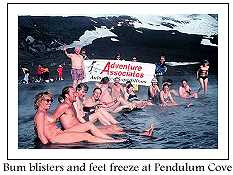 Completely absorbed by this dramatic and aggressive landscape, I stood on the rear deck of the Vavilov observing our cautious exit through Neptunes Bellows and snatched a few departing snaps of the overwhelming cliffs. I couldn't help wondering what it must have been like for the expeditioners who were forced to beat a hasty retreat amid the fury of the last great eruption thirty years ago.

Words and Pictures by Roderick Eime

Where is Deception Island? - See The Map
How to Get There - Adventure Associates