ONE of the world's most bizarre mysteries has fans of the who-dunnit genre as mystified today as when it involved Agatha Christie, the Grand Dame of Mystery herself, eighty years ago.

And there are more unanswered questions now than those the writer's very own mystery generated in 1926, with scenarios as baffling as any she could create.

Agatha Christie liked to write about places she knew, and none could be more apt for a mystery writer than the grand Pera Palas Hotel in Istanbul where she often stayed to pen her works, including the classic Murder on the Orient Express.

The hotel had been built in the early 1890s for well-heeled passengers on the legendary train, and played host to it's clientele of monarchs and politicians, playboys, musicians and movie stars, and authors such as Christie and Ernest Hemingway.

And with American and British Embassies virtually next door, to spies.

Margaretha Zelle, the exotic dancer better known as Mata Hari who was executed for spying for Germany against France in the First War, and Kim Philby the English double-agent who turned on his country to spy for Russia in the 1960s, were both Pera Palas regulars – slipping through an underground tunnel from the Bosphorus waterfront direct into the hotel's lobby.

Whether Mata Hari – with a Javanese mother, the Indonesian stage-name means "Eye of the Dawn" – used her Pera Palas exotic dancing as a cover-up while spying in Istanbul is unclear. Whatever, a room in the hotel is named after her.

But Kim Philby used the hotel assiduously to befriend British targets, including Embassy staff whom he "loosened up" with drinks after-hours, and spent hours on a telephone on the hotel bar – some claim that with his double-agent skills, to eaves-drop on the neighbouring British Embassy. 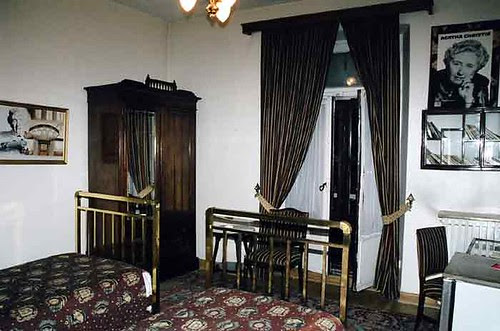 But it's Agatha Christie who draws inquisitive visitors daily to the hotel to see her regular Room 411, now permanently preserved as a memorial to her.

After a stay at the Pera Palas in 1926 Christie left suddenly, disappearing in Britain as mysteriously as one of her book characters. Despite an 11-day nation-wide search, she was not found until a tip-off she was in-hiding at a Harrogate country hotel.

Christie claimed memory loss after the shock discovery of her husband's infidelity, compounded by the death of her mother. She then refused to discuss the matter.

But on a 1932 stay at the Pera Palas she unexpectedly told staff "the key to my disappearance will be found in my diary on my death."

Christie died in 1976 and in 1979 the hotel owner brought in a clairvoyant who directed him to a key mysteriously hidden under a floorboard inside Christie's Room 411. But there was no clue as to what it might open.

The mystery faded away again until just last December when, after his death, staff found the former owner had locked the key in an unknown compartment within the hotel's safe.

Christie's official diary gives no clues to her disappearance, begging the questions: if there is a second diary in a box somewhere that the key found last December in the hotel's safe might open, what strange secrets might it reveal?

And did Christie really have memory loss in 1926, or did she "disappear" to Harrogate to write a quickie mystery based on her philandering husband?

Or had she stumbled on an intrigue at the Pera Palas Hotel in 1926 that spooked her to disappear?

Why did she go to the trouble to hide the key under the floorboard in the first place? And why was it then so carefully secreted in the safe to apparently prevent its discovery?

Its a mystery worthy of the Grand Dame of Mystery herself.

The Pera Palas Hotel today is a rustic reminder of what was once one of the world's grand hotels, still furnished in the cluttered olde-worlde style of its heyday, with nostalgic photos, old menus, and historic advertising posters on its walls… and the original and first electric "cage" lift in Istanbul.

Book a stay through travel agents. Or just drop in for a drink in the lounge and imagine rubbing shoulders there with Agatha Christie and the spies Mata Hari and Kim Philby.