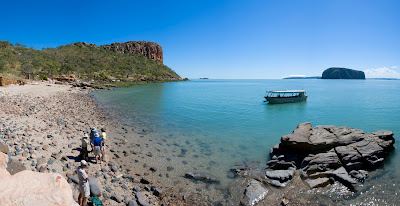 Dreaming of a lost world?

Aurora Expeditions offers travellers the chance to experience Australia’s remote Kimberley Coast on board one of their three expedition cruises departing in June 2009.

With such an isolated coastline, many of the Kimberley Coast’s most fascinating sites can only be accessed by sea. Passengers will visit islands with nesting boobies and frigate birds, revel in the amazing Montgomery Reef, uncover the ancient secrets of Aboriginal rock art galleries and participate in the excitement of spotlighting saltwater crocodiles. Carved by millions of years of extreme tidal patterns, complex river systems, waterfalls and freshwater swimming holes complete the Kimberley delights.

As with all Aurora cruises, emphasis is placed on a combination of interactive experiences with the environment and a strong educational element. Aurora’s onboard team of lecturers and naturalists are Kimberley experts who interpret history, plants and animals from Aboriginal and European perspectives.

These unique expeditions travel from Broome to Bigge Island off the Kimberley’s northwest coast and back again. Along the way travellers wander the long sandy beaches of the Lacede Islands, a prime breeding ground for green turtles and tens of thousands of breeding birds, inspect the tidal pools of Montgomery reef and uncover the secrets of controversial Wandjina spirit paintings.

Aurora’s third voyage explores from one end of the Kimberley Coast to the other, crossing Joseph Bonaparte Gulf and visiting the spectacular King George River on the north coast. Cruising north, expeditioners will explore the renowned horizontal waterfalls, the shark, turtle and whale rich waters of Montgomery Reef, Prince Regent National Park and the spectacular 90 metre plunge of the King George Falls.

Prices are from AU$6,450 per person twin-share, including all meals on board and Zodiac excursions.