Nukubati is a private island resort, a natural extension of a gracious and simple style of South Pacific living. It is environmentally conscious, powered by solar energy and it’s organic garden combined with freshly caught seafood creates a unique cuisine giving it an eco-chic feel. Catering for a limited number of guests, Nukubati is locally owned, preserving its incomparable Fijian style in an atmosphere of total seclusion.

Nukubati is the only resort in Fiji with access to this vast underwater treasure. Remote, pristine and untouched, this enormous reef with miles of hard and soft corals is being explored by guests of Nukubati Island. Manta rays, turtles, dolphins and whales parade among uncountable numbers of fish life, with a myriad of Nudibranchs, gastropods and crustaceans displaying around the corals.

Nukubati offers a range of dive types designed to suit your diving abilities and desires. Dives along sweeping walls where you drift through the colourful array of underwater life are balanced by shallow aquarium dives where you explore the wonderful macro-dive world below. All you need is your Open Water certification and the Nukubati dive team will introduce you to the delights that the Great Sea Reef has to offer.

All our resident divemasters are locals, born and bred in the surrounding fishing villages with traditional relationships with the ocean and the reefs. Their knowledge of the Great Sea Reef is instinctive and so is their skill to guide you for whatever your dive needs may be. 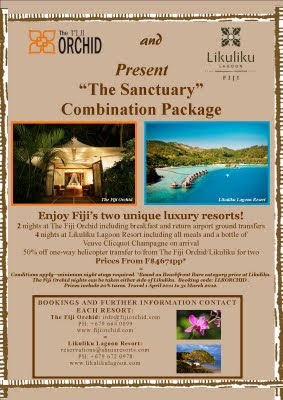 Fiji’s marine scientists have, for the first time, surveyed and documented the marine ecosystem of Fiji’s Great Sea Reef (GSR), the 3rd longest continuous barrier reef system in the world, and which is said to stretch a distance of some 150 kilometres along the Northern tip of Vanua Levu, Fiji’s second largest island.
Out of 35 priority conservation areas in Fiji, 5 areas were ranked to be globally important due to their uniqueness, endemism and high level of diversity, 15 areas were considered to be national importance and 15 of sub-regional importance.
Of the 5 areas of global importance, the Great Sea Reef is on the top of the list, being the 3rd longest barrier reef in the world. It has an exceptional level of endemism and intact systems of lagoons, channels, mangroves and seagrass habitats.

The report was administered by the WWF Fiji Country programme.

According to WWF’s Fiji office, a recent survey of the Great Sea Reef showed that it is home to:-

Among the rare, endangered and newly recorded species discovered were:-

• Populations of 12 species listed on the 2004 IUCN (World Conservation Union) Red List of threatened Species, including 10 species of fish, the IUCN threatened green turtle and the spinner dolphin;
• Populations of the locally extirpated and nationally endangered species of Bumphead Parrotfish (kalia)
• 3 species of fish considered to endemic to Fiji including one new species (Pommacentrus sp.) and one possible new record (Chromis opecularis) previously known only within the range of the Indian Ocean
• Within the hard corals, 43% new records were documented for Fiji. Of these, 2 were new genera, and 3 are believed to be geographic range extensions
• 16 species were found to be new additions to the flora of the Fiji archipelago. 2 possible new species were also recorded
• Unusual distant offshore mangrove island fringing reef habitats were found to be of surprisingly high diversity and productivity. These highly dynamic, tidally influenced systems are considered to be “keystone habitats” of crucial importance to maintaining the ecological integrity of the entire coastline
Posted by rodeime