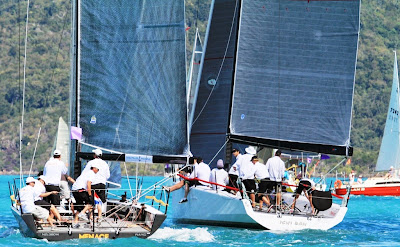 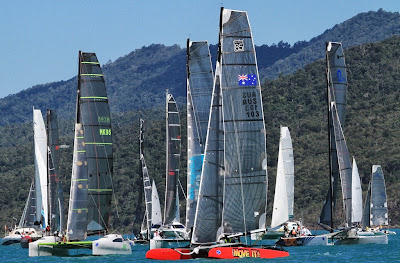 The Abell Point Marina Airlie Beach Race Week started off in magical conditions for all the 110 boats across the 11 divisions.

The breeze was a kind south-east eight to 10 knots inshore and up to 15 knots offshore as PRO Ross Chisholm sent the fleet off on Course 7 around the Double Cones for all, then Armit Island for the bigger, faster boats and then further along to Olden Island for the IRC Racing and OMR Multihulls.

There were plenty of battles today, among the small and big boats, with some of the high achievers falling by the wayside in the soft wind and tricky tides.

First off today was Multihull divisions 1 and 2 signalling the start of the Multihull Australian Championship. With a clear start they slipped nicely across Pioneer Bay to the Mandalay Mark. David Turton's Move It, Julian Griffiths Hot Vindaloo, Mal Richardson's Malice and George Owen's APC Mad Max all showed early form . By the Mandalay Mark, Malice was ahead of APC Mad Max with the smaller boats starting to fall back as the bigger ones settled into the kite run to Double Cones.

It was the 'dark horse', the Sea-Cart 30 Morticia, that took out handicap honours in Division 1 ahead of Malice and APC mad Max.

In Division 2 on handicap it was the 50 foot Fantasia with Andrew Stransky using his light air experience from the Asian racing circuit to place him in first ahead of Phillip Day's Rhythmic and Scott Gralow's Bulletproof.

The IRC Racing Division entrants were tight on the line at the gun. Racked up and heading across at the pin end were Peter Hewson's Storage King Wallop, Peter Mosely's Local Hero, Trevor Bailey's Carbon Credits and Berrnie Van'T Hof's Tulip. The two TP5s, John Woodruff's Frantic and Bob Steel's Quest, stayed closed to each other near the middle of the line. The smaller boats, Brilliant Pearl and Treasure VIII were bunched up at the start boat end.

With the expectation of the breeze abating, Steel thought at the start of the day he would be carrying too many crew for the conditions and would have a real battle on his hands with his arch rival Victoire. But by the end of the 31 mile race and with the breeze holding at about 15 knots outside the islands and down to about eight knots inside. Quest was across the finish line well ahead of Victoire. "We got the gun and I think Frantic was about 10 minutes behind us and Victoire about another 10 minutes. There weren't any challenges out there, just a beautiful day in paradise. We did well. Let's hope we did really well," Steele said.

Steele got his wish with a first on handicap ahead of defending champion Tulip and in third was Howard Piggott's Flying Cloud.

Next off was the Performance Division. The little Thompson 870 Where's Wal? was in the game with Walter Lewin and Matt Allen's Ichi Ban. Howard Spencer's New Zealand entry, Menace, was on its stern as the fleet crossed cleanly. Charles Wallis's Reignition was to weather. At the first cross the Farr 400 Ichi Ban was holding off the MC38 Menace as they tacked away. Ichi Ban kept a cover on Menace.

By the Mandalay Mark, Menace was just in charge of the division with Ichi Ban in among the mix as the battle between Menace and Ichi Ban gained momentum.

Sneaking into first place was Philip Grove's Huntress. Ichi Ban was second, just 29 seconds ahead of Menace on corrected time.

Ahead in the IRC fleet, one of the smaller entrants, Gary McCarthy's Beneteau 34.7 Brilliant Pearl, had their kite on the deck, bare-polling their way downwind, for some costly time.

The Multihulls OMR 3 and Performance divisions were next off and with a clean start they had a lovely leg to the Mandalay Mark. Tony Richardson's Pocahontas was in the lead followed closely by the highly rated Midnight Rain, skippered by Bill Ferguson, and Mike Willcocks's Hot Option.

Back at the start it was the turn of the Cruising divisions. In Division 1, Rob Date's Scarlett Runner, who is racing just today, lead the fleet and the big Don Algie's Storm 2 off the blocks. At first mark Scarlett Runner, with a cruising crew of just six, increased their distance on the fleet. Next around was Mal Robertson's Eureka II and Brad Ginnivan's Fifty Shades of 50. Back in the fleet and with a small kite was Division 2 defending champion John and Kim Clinton's Holy Cow!.

At the finish of race one, Mike Roper's Ropabull was the leader on handicap ahead of Storm 2 and Eureka II.

Division 2 leader on the first leg was the local boat, Craig Piccinelli's Wobbly Boot followed by Nautical Circle, with Sandringham Yacht Club commodore Chris Carlile on the helm, losing ground as they tried to get the kite hoist under control. Out to port was Nic Cox and Col Thomas's Tribal Elders and Roger Down's True Love.

According to the Trial Edler team it was an America's Cup style start for them. "We just missed the barging buoy by only an inch. But we were also taking no chances as we did a 360, just in case," Thomas said.

Cruising Division 3 and Cruising Non Spinnakers were the next two divisions off cleanly and enjoying the steady breeze. Working towards the finish there was nothing between the two Clubman 8s, Synchronicity and Kameruka.

Barney Army was first home in the division. Skipper Andrew Barney had his family working hard all day. Sons Hayden 10 and Jordan 7, along with his sweet little daughter 4-year-old Ayla , were hiked out on the way upwind with mum Carmen and brother-in-law , big Gaz. We only have Gaz for two days so if it is light enough, we will get Hayden to steer," Barney said. After tying up, the kids were still smiling about the great day and also about the free lemonade at the tent and the chance to go for a swim.

The family had reason to celebrate at the end of the day with a first on handicap ahead of Tom Jordan's Shady Tradie and Rob Davis's Breakaway.

In the Cruising Non Spinnaker it was Nick Small's Huahine ahead of John Galloway's QLD Marine Services. In third on handicap was Dan White's Riff Raff.

In the Sports Boat the skippers kept themselves under control for the first race, starting cleanly. Noel Leigh-Smith's Viper QLD was out to port with Leon Thomas's Guilty Pleasures and Graham Sherring's Stayed Tuned. At the Mandalay Mark John Rae's Vivace was ahead of Jason Ruckert's Mister Magoo, Guilty Pleasures and Brett Whitbread's Crank.

The Mister Magoo team said they were looking "famous" at the top mark, rounding in second place. Then disaster struck as the masthead halyard came untied. "There was no way of getting the spinnaker up so we had to drop the headsail. Then we were 20 minutes behind where we should have been," Ruckert said.

By the finish Whitbread reported, "Crank was first home and Vivace second and then Guilty Pleasures. We were all pretty close, within about three minutes of each other at the finish. It was pretty tame conditions for the Sports Boats," Whitbread said.

On handicap for race one of the series, Leon Thomas's Guilty Pleasures was first to Crank, then Vivace.

Racing continues tomorrow with passage races for IRC Racing, Performance Racing, Cruising Spinnaker and Non Spinnaker, and Performance Multihulls. The Sports Boats and OMR Multihulls will be on Pioneer Bay.

The full results are on - www.airlieraceweek.com

Photos – NZL Howard Spencer's Menace and Matt Allen and Walter Lewin's Ichi Ban have set themselves up for a week-long battle with little to show between the boats, except possibly the handicap.