Africa's Great Migration - One of the world's natural wonders

The Masai Mara and Serengeti are two of the most famous national parks in Africa, best known for offering up ringside seats to the Great Migration – which makes them both extremely popular destinations for luxury safaris.

The Great Migration is undoubtedly one of Nature's most unforgettable spectacles: 1.5 million wildebeest accompanied by 200,000 or so zebras are engaged in a never-ending journey, following the rains in a circular 1,200-mile route, through a wilderness that takes in the Serengeti National Park and Kenya's Masai Mara Game Reserve.

The annual migration actually begins deep in the south of Tanzania's Serengeti National Park, where an estimated half a million wildebeest are born between January and March each year. But when the rains trickle to a halt in May the land dries out, forcing the grazing animals to move on and head for their dry season habitat – the Masai Mara region in neighbouring Kenya.

With the beginning of the short rains in late October, the migration makes its way back into the Serengeti – which makes it the perfect time of year to be anywhere in the northern part of the National Park. By December, having emerged from the northern woodlands, the herds then return to their calving grounds in the south once again and the circle is complete. 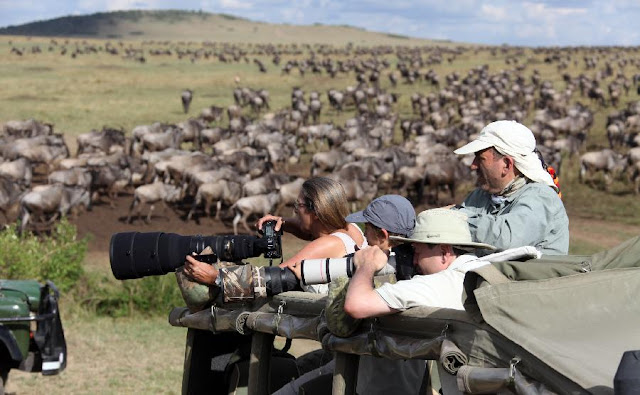 Of course, rain is the greatest motivator underpinning the annual migration and largely dictates where the herds can be found at any given time. For example from July to October is generally the optimal time to catch it in Kenya, although unusually dry conditions in the southern Serengeti have encouraged the animals to head north far earlier than usual this year, with hundreds of thousands of wildebeest arriving in the central areas of the Serengeti from as early as March.

The rainy season runs from October to May and typically begins with the short rains – a period of gloriously hot sunny days punctuated by brief torrential thunderstorms, before peaking with the long rains of April – a month to avoid when most camps close and the plains become quagmires.

When the rains end in May wildebeest normally head for the Masai Mara, navigating their way past hungry Serengeti lions, leopards, cheetahs, hyenas and crocodiles.

This year was a little different, the significant lack of rain having forced herds to leave their breeding grounds much earlier than usual. Lying in wait for them – the notorious Grumeti River crocodiles, which exacted a high toll as wildebeest traversed the river's still high waters.

Zebras are often the first animals to arrive in Kenya, grazing on the tall grasses, with wildebeest not far behind them. Here they remain from July to October – the main tourist season –when visitors flock to watch dramatic river crossings.

But as soon as the rains return the wildebeest head back to the Serengeti, drawn towards their calving grounds in the south of the Park. In the dry season there are few animals to be found here, but between January and March during calving season, surely nowhere in Africa feels so alive.