At the start of November, the vast savannah of the southern Serengeti is impossibly dry and water extremely scarce. Great numbers of wildlife have left, following the rain and rivers to the north, leaving the remaining inhabitants to adapt.

But come late November, it's a vastly different story; the rains have well and truly arrived, and with them the start of the Great Migration, as thousands of wildebeest head towards their calving grounds in the south of the Serengeti.

The precise start of migration varies each year. Depending on rainfall, sometimes smaller groups of wildebeest, zebra and buffalo move in first before the bulk follows. In other years it seems as though the entire herd arrives as one, blanketing the plains in huge numbers. Everyday is different and extraordinary: one afternoon, you might see a just few thousand animals, only to find an ocean of wildlife the next morning, with wildebeest and zebra stretching as far as the eye can see.

Each year the gathering draws the attention of plenty of opportunists. Kusini's pride of lions surveys the plains from their strategic vantage point – Mowe Ya Simba (meaning literally the 'Rock of the Lions' in Swahili). Ghostly leopards also lie in wait, while cheetahs steer clear of the chaos caused by larger predators and take refuge in the rolling vast savannah. And of course, large clans of ever-present hyenas roam in search of the weak, the wounded, and the ill.

The only permanent camp in this unspoiled and remote part of the Serengeti, Sanctuary Retreats' luxurious Sanctuary Kusini Camp. Every year vast herds of zebra, wildebeest and other game congregate right at the camp's doorstep from mid-December to March the calving season. 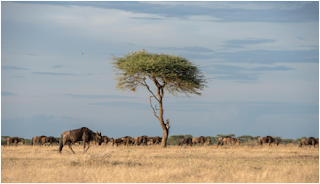