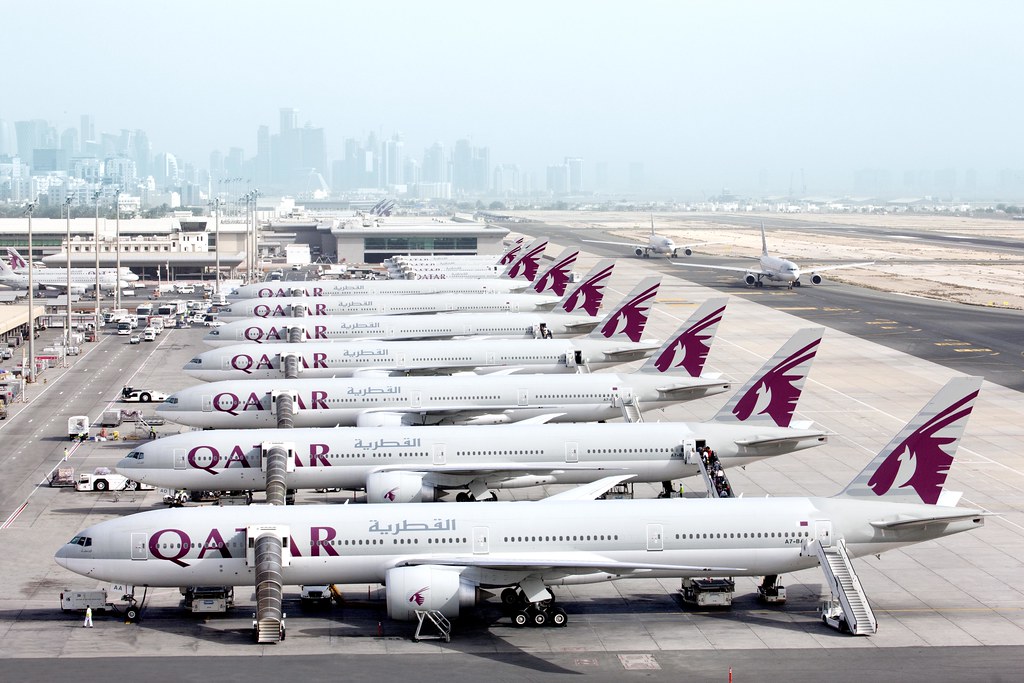 Qatar Airways is the national airline of the State of Qatar and one of the aviation industry’s big success stories. Operations began in 1994 when the airline was a small regional carrier serving a handful of routes. The airline was re-launched in 1997 under the mandate of His Highness The Father Emir, Sheikh Hamad bin Khalifa Al Thani, who outlined a vision to turn Qatar Airways into a leading international airline with the highest standards of service and excellence.

Qatar Airways has since become one of the fastest growing carriers in the world with unprecedented expansion averaging double digit growth year on year.

The airline has developed under the dynamic leadership of Group Chief Executive, His Excellency Mr. Akbar Al Baker, appointed in 1997, who has been instrumental in turning Qatar Airways into an award-winning carrier and the best in the world.

Under Mr. Al Baker’s stewardship, Qatar Airways has matured into a leading force in regional and global aviation, earning many admirers around the world for its excellent standards of service.

In October 2011, Qatar Airways attained another key milestone by taking delivery of its 100th aircraft.

During the Dubai Air Show in November 2011, Qatar Airways placed orders (firm and options) for 90 aircraft, comprising 80 of Airbus’ new A320 Neos, an additional eight A380 super jumbos and two Boeing 777 freighters.

During the 2013 Dubai Air Show the airline placed orders for more than 60 new aircraft – a mixture of Boeing 777X and Airbus A330 Freighters.

At the 2014 Farnborough Air Show, the airline placed an order for 100 Boeing 777X aircraft, taking Qatar Airways’ orders to more than 330 aircraft with a value of US $70 billion.

Qatar Airways has also joined oneworld, as of 30 October 2013, with integration into the global alliance completed within one year of the October 2012 joining announcement.

From Qatar Airways’ hub in Doha, the country’s capital, the airline has developed a global network of more than 150 destinations, covering Europe, the Middle East, Africa, South Asia, Asia Pacific, North America and South America with a modern fleet of more than 170 passenger and cargo aircraft.

In 2014, the carrier launched flights to Sharjah and Dubai World Central in the UAE, Philadelphia (USA), Edinburgh (Scotland), Istanbul Sabiha Gokcen Airport (Turkey), Larnaca (Cyprus), Al Hofuf (Saudi Arabia), Miami (USA), Dallas/Fort Worth (USA), Djibouti (Djibouti) and Asmara (Eritrea) in Africa. During 2015, Qatar Airways has extended its route network to more than 150 destinations including flights to Amsterdam (The Netherlands), Zanzibar (Tanzania), Nagpur (India) and Durban (South Africa). In 2016, the airline has so far launched routes to Los Angeles (USA) and Ras Al Khaimah (UAE). In the next few months the airline is further expanding its network to Atlanta (USA), Boston (USA), Sydney (Australia), Adelaide (Australia) and Yerevan (Armenia). Qatar Airways has also announced its expansion with an increase in frequency and capacity to many existing routes.

On 9 December 2015, Qatar Airways launched its new global brand campaign and tagline – Going Places Together – in New York, USA. The ‘Going Places Together’ campaign plays on the theme of achieving great things together whether for work, for family or for adventure, and encourages passengers to take journeys that will help them achieve their dreams and ambitions. One of the fastest growing airlines

operating one of the youngest fleets in the world, Qatar Airways has adopted the emotive and modern brand campaign to reflect its core values as a contemporary and innovative company that is really going places and wants nothing more than to inspire its passengers to do the same.

From only four aircraft in 1997, the airline grew to a fleet size of 28 aircraft by the end of 2003 and a milestone 50 by October 2006. Today the airline operates more than 170 aircraft to more than 150 destinations worldwide.

Qatar Airways has one of the industry’s youngest fleets with an average aircraft age under four years old. The Qatar Airways family includes several different Airbus and Boeing aircraft types – the long-range Boeing 777 passenger and freighter aircraft, the new Boeing 787, Airbus A340, A330, A350, A380, A300F freighter, A321, A320 and A319. The latter A319 includes a corporate jet version.

With the delivery of the A350 XWB aircraft in December 2014, Qatar Airways became the first airline in the world to operate every family of Airbus’ modern airliner portfolio, comprising the A320, A330, A340, A350 and A380.

Qatar Airways is one of the launch customers of the twin-deck Airbus A380-800 ‘super jumbo’ – the world’s biggest aircraft capable of carrying 517 passengers in a luxurious configuration. Qatar Airways has ordered 13 A380s with the first aircraft delivered in 2014.

In December 2014, Qatar Airways became the global launch customer of the Airbus A350 XWB aircraft with the first commercial service being deployed on the Frankfurt route on 15 January 2015.

Qatar Executive continues to expand its operations, placing an order for 30 Gulfstream business jets at EBACE in Geneva during May 2015. The 30 firm orders and options are a combination of Gulfstream’s new wide-cabin aircraft, the G500 and G600, and the existing G650ER.

Qatar Airways currently has more than 330 new aircraft worth more than US$70 billion pending delivery over the next few years. This includes an order for Airbus’ new generation A350s, A320 Neos, A380s, A330 Freighters, Boeing 777s, Boeing 777Xs and Boeing 787s.

Qatar Airways is proud to have been named Airline of the Year for the third time in 2015 as well as in 2011 and 2012 in the annual Skytrax World Airline Awards. Over 18 million travellers worldwide cast their votes in the survey by the leading global airline industry audit.

Having been elevated to third best airline in the world by Skytrax in 2010, announcement of the 2011 results ranking Qatar Airways as Airline of the Year was a culmination of the sheer dedication and hard work by the airline’s workforce under the leadership of its Group Chief Executive His Excellency Mr. Akbar Al Baker. To retain the award in 2012 was a magnificent triumph.

Qatar Airways was the first airline in the world to pass the International Air Transport Association (IATA) Operational Safety Audit with a maximum 100 per cent compliance in 2003 and passed the test again during the two-year renewal period in 2005, 2007, 2009, 2011, 2013 and in June 2015.

The audit was set up to standardise and rationalise a number of safety and security procedures carried out by individual airlines for the purpose of code sharing. Qatar Airways was assessed on flight and ground operations, aircraft engineering, maintenance, operational security, cabin operations and management systems.

Hamad International Airport commenced commercial operations in April 2014 at a cost of US$15.5 billion and with an initial capacity of 30 million passengers a year. Once fully developed beyond 2015, the airport is expected to handle up to 50 million passengers a year. One of the project’s key features is that 60 per cent of the site is built on reclaimed land from the Arabian Gulf.

Qatar Airways is managing the new airport, designed to help shape Doha as a key regional and global aviation hub.

As an industry leader, Qatar Airways and its group of companies strive to lead the charge towards environmental sustainability and corporate social responsibility. The airline is one of the leaders in new-generation fuel research and gives back to the communities in which we serve.

Qatar Airways goes beyond the current industry best practices for fuel and environmental management and is making a serious effort to ensure a sustainable future for the airline, its staff and its neighbourhoods.

In 2012, Qatar Airways negotiated a worldwide partnership with Educate A Child (EAC), a global education programme launched by Her Highness Sheikha Moza bint Nasser of Qatar. EAC is designed to address the plight of 61 million out-of-school children around the world, who are denied access to quality primary education.