The Massacre on the Abrolhos 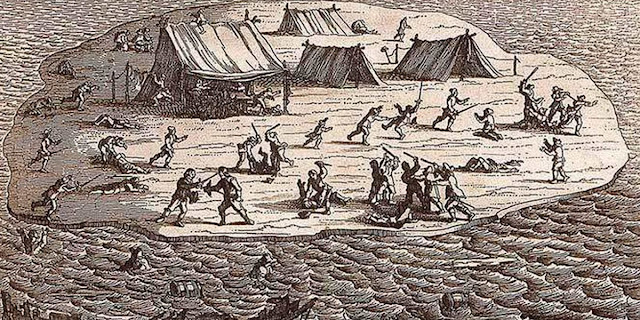 It was the middle of a moonlit night on 4 June 1629 when the brand new Dutch East Indiaman, Batavia, struck Morning Reef in the Abrolhus Islands. This event was the beginning of one of the most horrific tales of human savagery ever.

About half of the 268 survivors, including women and children, were systematically slaughtered by the mutinous and psychopathic Jeronimus Cornelisz who was plotting a career in piracy with the corrupt captain, Ariaen Jacobsz.

Relics of this spine chilling chapter of Australia’s maritime history can still be found on the Abrolhos Islands. Several graves were excavated on Beacon Island and their mutilated remain examined. A cannon still lies in shallow waters were treasure hunters tried in vain to get the heavy souvenir ashore. The hero of the Batavia, Wiebbe Hayes ‘fort’ still stands on Wallabi Island: Australia’s oldest known European structures.

In 1963 the wreck was located and the fable reignited. Many recovered items are on display in the Maritime Museum in Fremantle and replicas of both the ship and its famous lifeboat have since been built.

Located just off Beacon Island in about five metres of water, what remains of the wreck is a popular dive site.