The True Colours of Shanghai 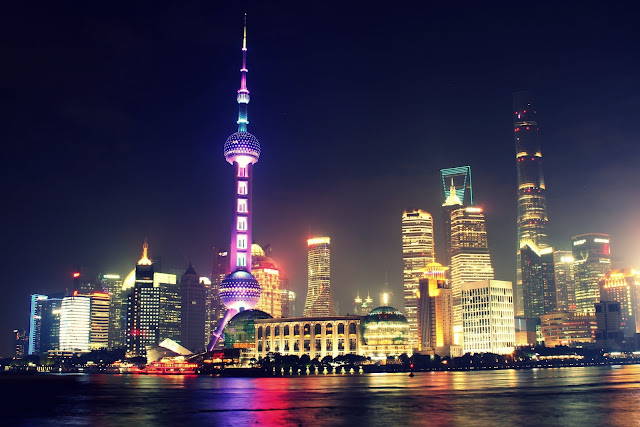 When it comes to the true color of Shanghai, the answers that spring to mind are bright neon lights, the magnificent skyline of Lu Jia Zui, the green and red of Yanzhong Greenbelt and the grey wall and red bricks of Shikumen, or Stone Gate. To bring out the very best of Shanghai during the 2010 Expo, it is essential to paint new structures in the color that best represents the city's unique character. It is difficult to represent Shanghai in one specific color because of its colorful history, extensive international engagement and the general pluralism of the city. Defects in the coloring of modern structures have aroused vast attention from all angles.

A glance at Shanghai's architectural coloring


A deep impression of the “mix of Chinese and foreign" styles

The elegant and historical walls, dark brown in color, of the hundredyear-old Peace Hotel; the grey walls and red bricks of the old lanes of Xuhui District being repainted from time to time; and the new Stone Gate buildings in Xintiandi, of uniform coloring and style, are a striking vision for all. When traveling on the elevated road, rows of eye-catching houses have attracted numerous new residents because of their pleasant, neat and bright color schemes. Heritage architectures account for a large portion of these impressive constructions.

"Lu Jia Zui, Xintiandi and the Yu Gardens all leave a deep and lasting impression on tourists from both home and abroad. Despite their own individual characteristics, some constructions or residential quarters wear a dull color and are drowned in a sea of advertisements and store signage,” an official from the China Fashion and Color Association argued when addressing Shanghai's colors.

From the traditional residences pre-liberation to the gallery of world architectures on the bund; from diversified buildings erected after liberation to the high-rises, every new building has been a showcase of evolution in local construction by drawing inspiration from overseas. It's on record that grey and white was the color of Shanghai's old lanes before the 19th century, then came the use of exotic red bricks, and from the beginning of the 50s and 60s of the last century, color-fast autumn took over as a popular color option. Most of the modern high-rises in Shanghai are coated either by face tiles or glass curtain walls, leaving a broader range of color options that is in tune with the speed and height of the city.

Shanghai has never been short of colors in its constructions; however, the co-existence of western, local and various regional architectural characteristics add to the difficulty in planning and coordinating the color of the city. Shanghai should apply different color choices to different areas, but not too different noted Prof. Xu Mingde of the Shanghai Theater Academy, who has studied art in Europe a number of times. The "Disorder" of Shanghai's construction colors is the top priority for resolution.

Shanghai's constructions are shaped in multiple forms, and the harmonizing of constructions and their surroundings is the key to setting the ideal color scheme. The Jin Mao Tower stands as a fine example, said Gu Enhong from ARR International, a Shanghai-based architectural design consultancy. Designers studied carefully and introduced the age-old pagoda approach into the scheme before it was completed. As a result, the work regarding profile, coloration and location of the building was artfully executed, making the Jin Mao Tower one of the latest and most recognized landmarks in Shanghai.

In addition to borrowing foreign concepts, many architectural designers have begun to give more thought to the harmony between constructions and their surroundings, in an attempt to keep the coloration from being overly prominent. If a building under design is flanked by a steel structure on one side and a concrete structure on the other, the coloration scheme would create a new color element by combining the grey of concrete with the original tint of the steel.

It takes in-depth research to determine whether Shanghai's constructions should have light or dark coloration, but the key is to introduce a multi-color system. The basic tone of the building facade shall be determined in accordance with blocks, road sections and districts and then harmony will be achieved through the matching of different color mixes. Take McDonald's and Xi'nianlai for instance: some additional color elements are suggested to be added to the former's bright red and yellow logo, and the latter's bright red logo, to fit better into their surroundings. It is known that professional consultancies have been set up in Western countries that specialize in urban coloration. Innovation proves to be the first task as China starts its research in this area.

After talks with architectural experts, it was revealed that brand new color matching concepts, fit for Shanghai, have been included in design drawings of new housing and commercial buildings now under construction. However, quite a few developers and investors would finally pick the general option or those about to be discarded because of their lack of innovative awareness. Some housing designers say they would go to lengths to promote any form or color of architecture as long as it is beneficial to urban development and fits harmoniously into its surroundings.

Warm colors are preferred by northern cities, whereas cold colors are popular in the south; blue is the color of choice for cities on the grasslands and cold color series such as azure, cyan and green are ideal for cities in desert regions. Officials from Shanghai Urban Planning Authority and Shanghai Administration on City Appearance and Environmental Sanitation said that because of the varying ages of local constructions and their co-existence with modern buildings, the application of a single main tone will not be considered for the time being and pilot experiments are encouraged in all parts of the city. Choice of color is now given high priority in the approval processes of various construction projects.

Experts advise that from a cultural perspective, black and white should be preserved for Qingpu and Zhu Jia Jiao, featuring the serenity of south China, to impress with the elegance of Chinese painting; dark tones comprising beige and wine red should be applied in Xuhui district, known for its veritable plethora of oldstyle residences. To present a comfortable and tranquil look, bright colors such as all white and off-white are the option for the rapidly-developing Pudong New Area, to create a lively visual impact for the modern era.

We wait in anticipation of how Shanghai will dress to hail the 2010 Expo with its unique charms.