FIGHTER WORLD aims to raise awareness of the past and present role played by the Royal Australian Air Force (RAAF) Tactical Fighter Force through a unique "hands on experience. Unlike other static aircraft displays you may touch the exhibits and experience the fighter pilot's complex work environment by sitting in the cockpit of a. Macchi Jet Trainer and a Mirage Fighter. PLEASE DO NOT ENTER ANY OTHER COCKPIT ON DISPLAY.

SAFETY is important at Fighter World. Please supervise children at all times. NO RUNNING IS PERMITTED

No food or drinks, other than water, are permitted in the display hangar to avoid attracting vermin.

WHAT IS ON DISPLAY ?

Vampire A79-1 is a 'first generation' single seat fighter built in Australia by the De Havilland Company. Vampire tail number A79-1 was the Royal Australian Air Force's first jet fighter, entering service in 1949. A two seat trainer version is located between the hangars undergoing restoration by Fighter World's volunteers.

Gloster Meteor A77-385 is painted to represent a combat veteran of the Korean War. RAAF No 77 Squadron whic operates the F/A-18 Hornet at Willimtown today, flew the Meteor in Korea from June 1950 until October 1954. The Meteor was no match in aerial combat for Chinese MIG 15s with 44 Meteors being lost. You are invited to view the Honour Board on the rear wall behind the Meteor with names of the No 77 Squadron members killed in Korea.

CAC Avon Sabre A94-951 was built in Australia by the Commonwealth Aircraft Corporation and was the RAAF's mainstay fighter of the late 1950s and early 1960s. The Australian CAC Sabre was an American design re-engineerec to fit a more powerful British Rolls-Royce Avon engine and twin 30 mm Aden Canons. Australian Sabres were later modified to carry sidewinder heat seeking air-to-air missiles as fitted to the Sabre on display.

Mirage A3-3 is a 1960s generation interceptor capable of twice the speed of sound (Mach 2). Mirage tail number A3-3 on display was the first of 98 single seat Mirages built in Australia by the Government Aircraft Factory at Avalon in Victoria. The Mirage was replaced by the Royal Australian Air Forces current front line fighter, the F/A-18 Hornet in 1984.

Mirage A3-102 is the second of ten dual control Mirage trainers built in Australia by the Government Aircraft Factory and used to train pilots to fly the high speed Mirage which had a landing speed of 165 knots.

The Macchi MB 326H displayed is a tandem two seat jet trainer that served with No 76 Squadron at RAAF Williamtown untit replaced by the current lead-in fighter trainer, the British Aerospace Hawk. The Hawk has been used since 2000 to train pilots in basic fighter combat maneuvers and for initial weapons training before moving on 1 the much more complex F/A-18 Hornet. You will notice that the Macchi is loaded with eight practice bombs which is a typical configuration for a bombing training mission on the nearby Salt Ash Air Weapons Range.

The Hawker Hunter displayed first entered service with Britain's Royal Air Force in 1956 before being transferred to the Royal Singapore Air Force (RSAF) in 1973. This Hunter was imported into Australia in 1995 and kindly donated to Fighter World by Sydney businessman Mr Greg Ackman of Mobile One Communications. Der Service in the RSAF it flew at WILLIAMTOWN on joint exercises and training attachments with the RAAF. Dedicated Fighter World volunteers assembled and restored the aircraft for display.

The Mikoyan Gurevich (MIG) 21 on display was built in Russia in 1969 and is painted in the colours of the Indian Air Force Aerobatic Team. It performed at air shows in Australia during the late 1990s. The MIG-21 was the main fighter of Warsaw Pact countries during the cold war period and became the most extensively used fighter aircraft in the world with over 6, 000 being built up to 1981. Many are still in service.

Aircraft Model Collections Along the left-hand wall of the display hangar are 350 1/72 scale model aircraft donate by Mr Norman Forrester of Nelson Bay. This collection took Norm over 40 years to create and is entirely hand carved from wood, plastic and resin. Each model is hand-painted. Further along are diorama models of wartime German and British fighter airfields. Still further along is a collection of model aircraft from the Second World War, Korean War and the Vietnam Conflict built from plastic kits and donated by Mr Ian Sprent. Hanging above you on the opposite wall are outstanding painted metal outline models of famous aircraft donated by the wife of the late Bert O'Hara of Newcastle. 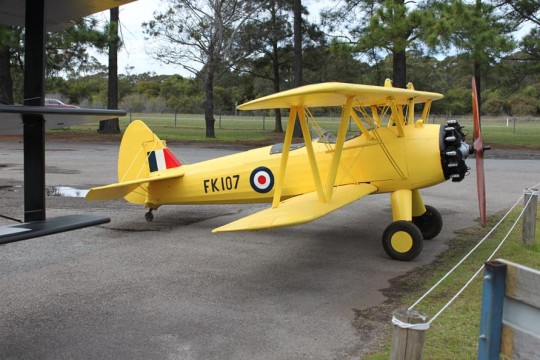 DVDs Showing Continuously Take a seat, have a rest and view DVD documentaries of RAAF Operations and fainous fighter aircraft in the right hand corner of the display hangar.

The Observation Deck The stairs in the far left hand corner of the display hangar lead to the Observation Deck froi which aircraft movements may be viewed on Williamtowns Runway 30/12 and taxiways. Newcastle Airport Termin: Buildings and airliner tarmacs may be observed to the left of the runway. Air traffic is controlled by Air Force Air Traffic Controllers who you can hear on speakers throughout the display hangar and on the observation deck.

WHAT IS ON DISPLAY IN THE RESTORATION HANGAR NEXT DOOR ?

The Spitfire MK V111 Replica on display is a fibre glass, timber and metal full size replica of a RAAF No 79 Squadron Spitfire which operated in defence of Darwin and New Guinea during World War Two. The replica has been constructed using some authentic Spitfire components in its structure. Can you identify them?

The Messerschmitt BF 109F Replica displayed is a full size fibre glass and timber replica of Germany's most famous fighter of World War Two. The Spitfire and Messerschmitt BF 109 were arch enemies in the famous Battle of Britain. Fighter World's replica is painted to represent the regular aircraft of Oberleutnant Carl Hans Roders who was killed when his Messerschmitt was shot down by a Spitfire over the English Channel on 23 June 1941.

Fokker DR-1 Triplane Replica displayed is a 2/3rds scale replica of one of the most famous German fighters of World War One. Fighter World's black aircraft depicts the personal aircraft of teenage fighter ace Leutnant Josef Jacobs who claimed 48 victories when in command of Jagdstaffel 7 during 1918 at the age of only 19 years.

Commonwalth Aircraft Corporation Winjeel The Winjeel is a piston radial engined side by side two seat traine designed and built in Australia for the RAAF. Winjeels flew at Williamtown as Forward Air Controllers on Army Support missions guiding artillery and other weapons onto targets.

Jindavik The Jindavik was a Australian designed and built jet powered aircraft remotely piloted from the ground by radio control. It was used as a target aircraft and for aerial weapons research.

Thank you for visiting Fighter World. Please tell your friends about us. Perhaps your club or school may wish to organize a bus tour. A tour of RAAF WILLIAMTOWN with a Fighter World guide by groups of 10 persons or more using your own bus may be arranged at no cost with a prior booking.

DONATIONS Fighter World is funded entirely by admission fees and souvenier shop sales. There are currently Do government grants or sponsors to enable Fighter World to acquire or restore new exhibits. Any financial donations by individuals or organizations would be used to further develop our display of Australia's fighter aircraft heritage.