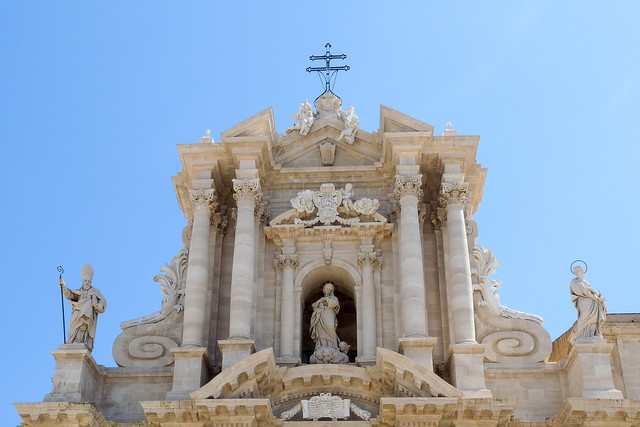 With its history, art, natural beauty, people and food (especially the food) Sicily is a fabulous place to visit any time of the year, however, it particularly great in the autumn when the crowds have gone; the temperatures are mild and the days are long and lazy.

Hidden Italy has a number of tours in Sicily (guided and self-guided: centre, north, east and west) but one area we don’t include is the south-eastern corner, below Catania: with a spectacular coastline in front of rugged mountains; vineyards stretching down to the sea; the marvellous city of Syracuse and the celebrated cluster of Baroque towns that were rebuilt after a devasting earthquake at the end of the 17th century.  Having finished your Hidden Italy walking tour….. grab a car ahead south to explore this wonderful corner of the world and we can recommend the perfect place to use as your base, which has its own place in history.

On September 3, 1943, the Armistice between Italy and the Allied forces was signed by Dwight D Eisenhower and General Bellano under a carob tree in the estate of Baroness Coraly Grande Sinatra, outside the town of Cassibile, a short drive south of Syracuse on the east coast of Sicily.  Today, this historic estate has been converted into a luxury hotel under the guidance of the baroness’ granddaughter, Lucia Pascarelli, who named it in her forebear’s honour: Donna Coraly Resort.

The carob tree still exists, marked with a plaque, and is the centrepiece of the botanic and vegetable gardens that stretch out behind the main house.  The hotel has six beautifully appointed rooms, each with its own terrace opening onto the gardens; a large swimming pool and a renowned restaurant.  It is the perfect base from which to explore the fascinating south-eastern corner of Sicily.

Donna Coraly Resort (contrada San Michele, Cassibile).  This magnificent estate has been in the Grande family for centuries.  It includes a spring-fed lake where you can swim surrounded by flowering plants and centuries-old trees.  It also has an excellent restaurant that proposes traditional Sicilian dishes with an innovative twist.  Most of the produce is sourced from their own gardens.  Doubles with breakfast and evening aperitivi included start at 330 euro.

Gagliardi (Via Spaventa 41, Noto).  This boutique hotel is in the centre of Noto, one of the celebrated Baorque towns south of Cassibile.  It has ten rooms in a renovated 18th-century palazzo, steeped in Sicilian history.  There is a large terrace with spectacular views over the town.  Double with breakfast start from 228 euro.

Scicli Albergo Diffuso (Via Mormino Penna 15, Scicli).  This ‘diffused hotel’ is a collection of forty-five charming rooms scattered through the centre of this picturesque town, ranging from standard to superior (with private gardens) and executive (situated in historic palazzi).  Doubles with breakfast from 70 euro to 197 euro.

Ristorante Don Camillo (Via delle Maestranze 96, Ortigia, Syracuse).  This small family-run restaurant on the island of Ortigia in the centre of Syracuse was born in 1985 and has earned a reputation for its interpretation of classic local dishes.  It also has a very good wine cellar.  Dinner per person around 60 euro.

Anche gli Angeli (Via Arnaldo da Brescia, 2, Noto).  Local Sicilian cooking in a place that includes a ‘corner shop’ and a bookstore.  Renowned for its seafood crudite.  Around 45 euro per person.

Porto Ulisse Beach (Localita Porto Ulisse, Ispica).  This is one of the most elegant beach clubs in the area.  It has a beachside kiosk that specialises in fresh seafood (its cous cous is said to be a must).  Around 30 euro per person.

Check into your hotel.  Go for a stroll in the botanical gardens.  Have a swim in the spring-fed lake.  Enjoy an aperitivo on the terrace and then finish with a delicious dinner under the guidance of chef Salvo Bulla.

More than any other Sicilian city, Syracuse (Siracusa) has a past that is central not just to the island’s history but to that of the entire Mediterranean region.  Its greatest splendour belongs to antiquity when it was one of the dominant cities of the Greek world, the New York of ancient times.

All this is reflected in a staggering diversity of monuments, spanning the Hellenic, early Christian, Medieval, Renaissance and Baroque eras – the styles are often shoulder to shoulder, sometimes in the same building.  Combined with its inspiring location (the old town is an island, Ortigia, connected to the mainland by a narrow isthmus) this medley makes Syracuse one of the most enjoyable towns in Sicily in which to spend time.

Start by exploring the streets of Ortigia which are crowded each day with markets that fill the air with colours, perfumes and cries of the vendors.  Here you will find everything from clothes to dried fruit; from fresh fish to local cheeses.  The most picturesque stands are those dedicated to spices and the food stands which offer paper cones of fried calamari and oysters, accompanied by cups pf local bubbly.

The heart of the town is the spectacular Piazza del Duomo, dominated by the cathedral.  This extraordinary Baroque building has been a place of worship for two and a half thousand years, incorporating an ancient Hellenistic temple, whose massive pillars are visible in the church’s walls.

On the opposite side of the square is the Palazzo Borgia del Casale, which has only been opened to the public for two years after a long restoration.  This beautiful Rococo palace was owned by the Borgia family (as in the notorious Lucrezia).  It’s elegant rooms, filled with sensuous stucco and frescoes, capture a lost world that comes straight out of the pages of The Leopard, preserving the glamour of its past when it was a social and artistic hub.  The small church next door, Santa Lucia alla Badia, holds a masterpiece by Caravaggio ‘Burial of Santa Lucia’, which was painted in 1608.

After lunch, it is time to explore the town’s archaeological treasures, starting with Frederick II’s magnificent Maniace castle, built between 1232 and 1240, is said to be one of Sicily’s most impressive (open between 08.30 and 19.00 daily, 4 euro per person).  The town’s most important site, though, is Neapolis (the ‘new city’) that stretches out on the mainland behind Ortigia.  It contains most of the ancient city’s social and religious amenities, such as the theatres, altars and sanctuaries, and hence was never inhabited.

Neapolis includes the Teatro Greco, the town’s most spectacular monument and one of the largest Greek theatres in existence.  It was first built in the 5th century and regularly modified until it was converted into an arena for gladiatorial combat by the Romans.  Concerts and Greek dramas are now hosted here throughout the summer.

Other highlights of Neapolis include the Ara di Ierone II, a two hundred metre long altar, the largest of its kind in the ancient Greek world (it is said that four hundred and fifty bulls were sacrificed here in the annual feast dedicated to Zeus) and the Latomie of Paradise, vast quarries from which the rock for the city’s monuments were excavated.  The quarries also served as a prison for seven thousand prisoners-of-war, who were seized after Athens ill-fated attempt to invade the city.  At the end of the quarry is a remarkable cave (sixty metres long and twenty metres high) known as the Orecchio of Dionisio (Dionysius’ Ear), so named by Caravaggio because of its resemblance to a human ear.

Sunday:  Explore the Baroque towns nearby

Noto, a Baroque gem completely rebuilt after a devasting earthquake completely destroyed most of the towns in this valley in 1693.  It is a fifteen-minute drive south of Cassibile.  It is one of the best-known towns in this part of Sicily and well worth a visit.  On the way, you should stop at the Villa del Tellaro, the remains of a villa from the late Imperial age of Rome (the 5th century AD) which has a vast mosaic flooring, reflecting the unknown owner’s love of hunting.

Noto is known as the Capital of the Baroque and was completely rebuilt is a single harmonious style under the guidance of a Sicilian-Spanish aristocrat, the Duke of Camastra.  He devised a revolutionary new concept in town-planning, based on two completely separate quarters: one for the religious and political establishment and the other for the people.  Within an astonishingly short time the work was complete, a new city, planned with an accent on symmetry and visual harmony.  One guidebook intones: “you should not miss visiting Noto under any circumstances!”.

The churches and palaces are enlivened by rich sculptural decoration, garlands of flowers, putti and animals, and it is a pleasure to simply stroll through the streets of the town enjoying the show.  The star turn is the Piazza del Municipio, which is said to be Sicily’s finest piazza.  It is dominated by the town’s cathedral at one end and the Townhall, Palazzo Ducezio, at the other end.

Upstaged by its more famous neighbours, the little town of Scicli, a short drive further south, has a rather sleepy and neglected air, which is all the more reason to visit it, it is a pleasure just to wander around and soak up the atmosphere.  The town is dramatically pitched against the bottom of a knobbly bluff.

Scicli’s profusion of pale-yellow churches, balconied palazzi and spacious piazzas still retain the graceful lines and tones typical of the region’s post-earthquake towns.  It’s charming, quiet streets and lanes have been used as a set for a number of the Montalbano episodes (another reason to visit).  Before leaving, an obligatory stop is at the Gastronomia Trovato for an arancino, one of Sicily’s culinary treasures, a deep-fried rice ball filled with cheese or meat sauce.

The Orientata Cavagrande di Cassibile Nature Reserve is only a short drive from the Donna Coraly Resort.  The Reserve is dominated by the Cassibile River, which features a number of rapids and waterfalls.  The icy waters of the river and nearby lakes are popular swimming holes for the locals in the torrid heat of summer.  A marked, six-kilometres loop trail takes you through the wild countryside with views over canyons and grottoes and plenty of chances to swim and enjoy a picnic.  Although the trail is reasonably straight forward, it is probably better to play safe and take a local guide so you can enjoy the Reserve’s treasures fully.  Guided tours and private guides can be booked through Step Siracusa Trekking

Ognina is a cute little port-town, a ten-minute drive from Cassibile.  It is on a stretch of coast that is a combination of rocky cliffs overlooking the sea, white sandy coves and sea caves lapped by the crystal waters.  Offshore, there is a deserted island that can be reached by swimming.  Ognina Sun e Food is a simple restaurant with a terrace overlooking the beach, specialising in seafood (open for both lunch and dinner)

For something a little more upmarket, spoil yourself and keep driving south to Marina Marza, a long stretch of fine golden stand bounded by sandstone cliffs.  The star turn here is the Porto Ulisse Beach Club.  The club has thirty-two umbrellas stretched along the beach, each of which comes with two sunlounges (plus two small chairs for children under 12, on request).  The cost depends on which row you are in (35 euro per day for the front row or 25 euro per day for those up the back).  It has bar service and you can enjoy a light lunch brought from the kiosk to your sunchair (oysters with champagne perhaps).

The Beach Club also has an excellent restaurant that can be booked for a delicious seafood dinner, after which, as the website says: “it will be nice to linger while sipping an aged rum while the sea whispers its song” and who could argue?