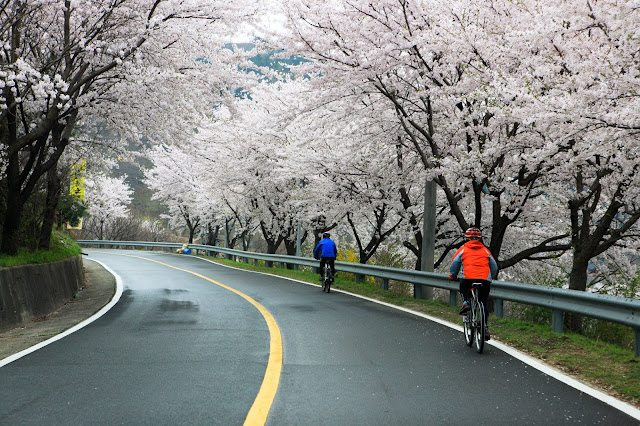 South Korea has one of the most advanced cycling infrastructures in the world and is a popular sport for locals, with trails tailored to families, leisure cyclists and professionals alike.  There is an extensive network of bike paths and quiet secondary roads that will take you past areas featuring remarkable Buddhist temples and UNESCO World Heritage sites.

Bike paths in South Korea are geared toward leisure riders and are well marked, paved, flat trails, designed for pleasure however you will find some more challenging cross country and there is a diversity of path skill level - easy, moderate and advanced.  The best time to cycle is spring (March, April, May) early summer (June) and autumn (September, October, November), as winter can be very cold and summer very hot. Cycling is a great way to explore South Korea’s coastlines and beaches, lakes and rice paddies, islands and lush green interior.  Along the way it’s easy to find simple accommodation, eateries, and saunas for those tired limbs.

The Hangang Bicycle Path (Hangang Trail) follows the Han River starting on the edge of Seoul, cruising through the capital and following the South Han River into the city of Chungju, near the centre of the country.  It spans 240kms and provides excellent views of Seoul’s unique skyline and Yeouido Hangang Park - a green space most known for its iconic cherry blossom trees.  The trail connects the Nanji District, Mapodaegyo Bridge, Banpodaegyo Bridge, Seoul Forest and Gwangjindaegyo Bridge.  The trail spans from Seoul’s downtown out to satellite cities hence its popularity with both commuters and tourists alike.

The sealed Cross-Country Route consists of four bicycle paths - Ara, Hangang, Saejae and Nakdonggang.  The Cross-Country is considered one of the best paths in the world, a dedicated cycling highway with multiple lanes designed just for bikes.  It is one of the most challenging trails as it runs from the north west corner of South Korea (Incheon – the gateway city of South Korea) to the south east corner (Busan) spanning up to 630 kms and taking around 12-15 days. This route is renowned for the quality of trails and the scenery along the way and its impressive length.  Enthusiasts should call into the interactive Sangiu Bicycle Museum which covers the history, culture and technology of the simple bicycle.

The Jeju Fantasy Bicycle Path is approximately 234 km long, consisting of 10 courses that can normally be completed in five days.  The trail winds its way along the coast, past beaches and cafes, and natural beauty spots. The recommended time for a day’s travel by bike on Jeju (which along the coast is quite flat) is between 4 and 8 hours.  Experienced cyclists can circumnavigate the entire island in 9-16 hours, but not at a relaxing pace.  Each course along the Jeju Fantasy Bicycle Path has a stamp station so you can collect all 10 stamps.  It’s recommended to ride anticlockwise to circumnavigate Jeju Island, so the coastline is on your right, the same side as traffic - allowing for uninterrupted views. The trail will take you through Jeju City, Hyeopjae Beach, Songaksan Mountain, Jeongbang Waterfall, Seongsan Ilchulbong and Udo Island.  Affordable guesthouses and eateries can be found all the way.

Korea’s Bike Certification System created a program whereby cyclists can document their journey across South Korea’s extensive cycle paths.  Simply purchase a Bike Certification Passport (around AU$5) and as you ride, find red phone booths along the way and stamp your passport with the unique stamp inside.  After you collect all the stamps, you’ll be awarded with a certificate and will be able to purchase an Olympic style medal.

In 2012 Korea completed the Four Rivers Project, an infrastructure project that constructed a series of dams and weirs, to secure water resources and restore Korea’s four major rivers.  The project also built recreational parks and added an extensive network of bike paths.  These new paths connected with local bike paths allowed bikers to ride across Korea.  To enhance the cycling experience, the Ministry of Interior and Safety and K-Water created a Bike Certification System.

Twelve bike paths make up Korea’s Bicycle Certification System.  They flow across the peninsula, along the east coast, and down four major rivers.  The Certification Checkpoints are found every 15-30 kilometres generally stamp booths are located near a view, local attraction, or food outlet.

Public transport with a bike

A bike can go in the luggage compartment of express and intercity buses for free without any packaging.  Trains take bikes for free and fully assembled, on weekends and holidays only and ferries connect all the islands not served by bridges for a small fee, fully assembled.

For more information on South Korea go to visitkorea.org.au .