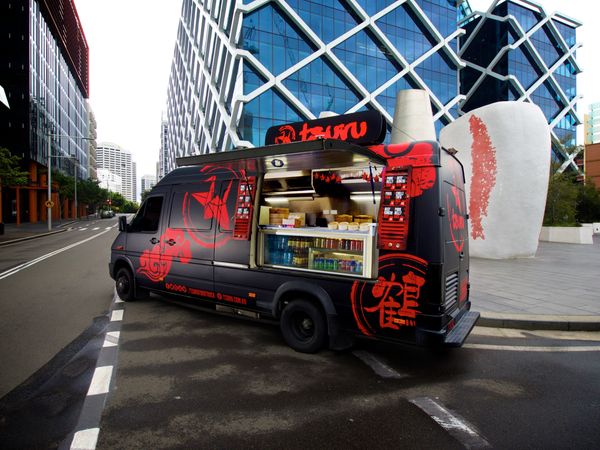 There's a unique kind of joy to sitting on a milk crate with a paper plate laden with flavourful food balancing on your knees. NSW has long had a love affair with food trucks, which shows no signs of abating. Here are some of the tastiest in town:

Rico's Taco Truck
Top pick: chorizo al pastor
Toby Wilson has been making tacos under different names and in various locations over the years, but his fans will follow him anywhere. His most recent iteration is Rico's Taco Truck, which has been stationed at Grifter Brewing Company in Marrickville over the weekends, recently finding a bricks and mortar home in Chippendale.

Knafeh Bakery
Top pick: knafeh
Knafeh is a Middle Eastern sweet cheese dessert drizzled with syrup and sprinkled with pistachios, loved all over the region. A pop-up bakery in an old shipping container has raised the profile of this iconic dessert, with the bearded bakers serving it to Sydneysiders in the western suburbs for six years.

Shiso Fine
Top pick: pork and garlic gyoza
Decorated with a pretty illustration of Japanese flora and fauna, Shiso Fine has been cooking gyoza and yakitori all over Sydney since 2016. You'll often find them at inner west breweries over the weekend, as well as festivals throughout the year.

Eat Art Truck
Top pick: Texan-style nachos
Dedicated to supporting the local art scene, this food truck commissions different artists every month to paint one side of their truck. Try their American barbecue snacks such as brisket cheeseburgers and buffalo wings at music festivals around the state, and many other events.

Chebbo's Burgers
Top pick: smash burger
Stationed in Roselands in Sydney's south west, this truck is known for its smash burgers, an American cheeseburger where the patty is pressed onto the grill to create a flavourful crust. The owner has garnered a loyal following on TikTok where he posts burger tutorials and tips.

Dope Fusion
Top pick: jerk prawn roll
This truck's menu is all about customisation, with five proteins to choose from (including jerk prawns and marinated octopus) and four ways to eat it – in tacos, in a roll, on rice or loaded on fries. You'll find it regularly in Brookvale and Cromer and popping up at festivals across the Northern Beaches.

Tsuru Food Truck
Top pick: black pepper beef and deep-fried kimchi bao
The black and red truck (and a kombi van, too) can be found dishing up Asian fusion street food snacks, including their signature bao buns, cassava chips and pandan pancakes all over Sydney. They are known for creating inventive specials, with deep-fried spam musubi, mi goreng toasties and lychee vodka bubble teas all on the menu recently.

Lambda
Top pick: lamb souvla
It's all about the charcoal grill for this Greek food truck. Specialising in lamb souvlaki and skewers, they also serve loaded fries and baklava ice cream from their blue and white truck. They travel all over Sydney so keep an eye on social media.

The Palmetto
Top pick: pulled pork bbq sandwich
A pale blue 1970s caravan and an off-set smoker can be found making its way around Coffs Coast, serving a delicious menu of Southern-style smoked barbecue. The owners are passionate about local produce and have an organic vegetable garden at home they use to supply the truck.

Mr Goaty Gelato
Top pick: butter caramel
The gelato is churned at their headquarters in Erina on the Central Coast, where they have a fragrant garden at their disposal to create flavours such as honeycomb and lavender and strawberry rose, as well as versions made with goat's milk and vegan sorbets with locally grown fruit. Catch the van beachside along the Central Coast.

Smokin Bro & Co, Mudgee
Top pick: brisket burger
A family affair, this caravan can be found at Three Tails Brewery and Smokehouse in Mudgee from Wednesday to Sunday. They are all about traditional Southern smoked barbecue, serving tasting plates with sides as well as burgers and meat pies.