TRUE TALES OF THE SOUTH PACIFIC 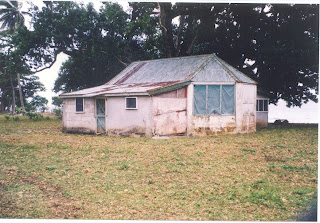 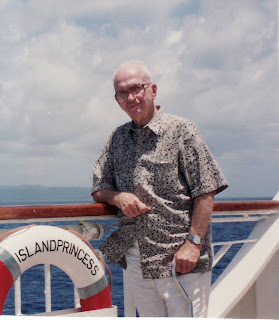 TRUE TALES OF THE SOUTH PACIFIC

ALTHOUGH he died eleven years ago, the name James A. Michener is still
as synonymous with the South Pacific today as it was when he put pen
to paper 60-odd years ago and chronicled the lives of Bloody Mary,
Nellie Forbush, Emile de Becque, Atabrin Benny and a host of other
wartime misfits.

Yet few know that this remarkable author of more than 40 books that
sold over 75 million copies, had to use a nom de plume in 1947 to have
his original classic, Tales of the South Pacific accepted.

Nor that the same publisher rejected his second manuscript, citing a
"lack of any literary potential."

Tales of the South Pacific of course went on to become a household
name, with the stage show and movie of the same name still enchanting
audiences to this day, four decades after Mitzi Gaynor first Washed
That Man Right Out Of her Hair.

And the book won Michener the Pulitzer Prize for Fiction.

In January 1992 Michener and I "Returned to Paradise" to his beloved
Vanuatu, where as an American Navy Lieutenant in the 1940s he worked
on the island of Espiritu Santo amongst the characters whose lives he
later made famous in Tales of the South Pacific.

Regrettably the tail-end of Cyclone Betsy prevented our cruise ship
from landing us on Santo, but the ever-positive Michener said just
sailing-by was a fair enough alternative.

Had we landed, he would have found the island still sprinkled with
relics from the war years he spent there: two of its three wartime
airstrips are still there but largely now overgrown, Bloody Mary's
trade-store stands forlornly next to a concrete slab that's all that's
left of Michener's own Santo digs, and the strangely octagonal-shaped
home of Tales' French planter, Emile de Becque is occupied to this
day.

And in the jungle the wreckage of wartime planes, trucks and supply
sheds lay vine-enshrouded and rusting – while off-shore he would have
seen the brooding volcanic Ambae Island that he dubbed Bali Hai in
Tales.

None of Tales' characters were figments of Michener's imagination; all
existed, he just changed their names to protect their anonymity.

The most famous, Bloody Mary did run a questionable trade-store
business, and did have one of the few government-issue ice-making
machines on Santo, and she did drive an American Marines' jeep…
'acquired' under circumstances that Michener, at one time an
Intelligence and Supply Officer, told me "did not bear thinking
about."

A feisty Tonkinese from now-North Vietnam, Bloody Mary was a
descendant of cheap labour brought into the-then New Hebrides by
planters, and one of the few who stood up for herself.

After the war, Michener returned to his job as a text book editor in
New York and in his spare time completed Tales of the South Pacific,
but as his company would not accept manuscripts from employees, he
submitted it under the nom de plume David Harper.

When it was accepted, Michener 'fessed up that he was 'David Harper'
and that he had a second manuscript for consideration. A superior
enraged that Michener had duped him, refused to even look at the
manuscript, so in his lunch hour Michener took it to another
publisher.

When he told them who he was, the managing editor welcomed him like a
long lost brother – and accepted his manuscript sight-unseen. Puzzled,
Michener asked why all the fuss, and was told the radio had just
announced that Tales had won the Pulitzer Prize for Literature.

He signed-over his manuscript – Fields of Fire – and when he returned
to his employer found they'd had a miraculous changed of heart, and
now wanted to buy his second work.

Michener's response was curt, and at 41 years of age he resigned to
start one of the greatest writing careers the world has known.

He churned out over 40 books and enormously wealthy, but with no
children, Michener and his third wife, Mari – who preceded him by
several years – gave over US$100m to universities, libraries and
charities.

James A. Michener died aged 90 on October 16 1997 after requesting
that his dialysis machine be turned off.

(Guided tours to sites made famous in Tales of the South Pacific are
available on arrival on Santo; see travel agents or phone Coral Seas
Travel on 1800 641 803.)