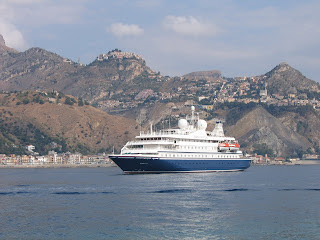 PUCHASING PATTERNS AND THE WORLDWIDE ECONOMY

Questions and Answers on the Economy, Recession, Stock Market Volatility,

MIAMI, Feb. 26---In the face of the barrage of unsettling economic news worldwide and dire predictions of its impact on discretionary spending patterns, SeaDream Yacht Club, award-winning purveyor of ultra luxury seagoing vacations, surveyed its customer base recently and came away with some conclusions that knocked its socks off.

SeaDream's President and CEO Larry Pimentel stated today that although the upscale operator has been experiencing near100 percent utilization of staterooms aboard its twin mega-yacht cruisers SeaDream I and II, this has occurred at the same time that dire predictions about the economy and their possible influence on spending patterns has dominated the news. "Hence, we surveyed the top 5000 of our most active guests. They concluded that upscale travelers will not be greatly affected by economic bad news and will continue to travel.

Middle income travelers are likely to be highly affected." he said.

Specifically, the opinion survey of SeaDream's past passengers indicated conclusively that a sizable majority of upper income households (65.3 percent) will continue to travel as usual for rest, recreation and other leisure pursuits.

34.2 percent stated some travel would be curtailed and only .06 percent said upper income households would curtail all travel.

But middle income households will be more circumspect about future travel according to the survey and a sizable percentage will curtail some or all leisure travel plans. Only 5.5 percent felt the group would travel as usual. 83.2 percent will curtail some travel and 11.3 percent would curtail all discretionary travel.

The opinion survey by Miami-headquartered SeaDream Yacht Club---which operates the 100-passenger SeaDream I and II on scheduled sailings and full ship charters in the Caribbean and Europe---drew responses from more than 26 percent of a 5000 person database of affluent, past passengers with a minimum household income of $250,000 per year.

The opinion survey showed further that while travel for the upper strata would not be greatly affected, other discretionary spending would be severely curtailed. Perhaps not surprisingly home purchases and jewelry took the biggest hit. Logically, with housing---that distressed section of the economy--- many respondents expressed the belief that home purchasing would be at the top of the list of dramatically curtailed spending.

But it was the opinions of these affluent responders on such high profile issues as the economy, recession, stock market volatility, the U.S Government economic stimulus package and perceived problems that may be exacerbating them that was perhaps the most startling to SeaDream officials.

When confronted with a statement saying that the economy worldwide is fragile and unsettled and then asked if they believed the U.S. and other parts of the world are sliding into a recessionary period, more than 70 percent said "Yes."

When asked if such a recession would be short term or long term, almost 80 per cent (79.6) answered "Short Term."

When asked if stock market volatility was "just an inevitable swing." 78.3 per cent replied "Yes."

The question "Will the stock market correct itself?" drew 57.2 per cent yeses with a majority stating it would correct itself but "Only after several years of volatility."

When asked if the U.S. Government intervention with an economic stimulus package would cause the stock market to correct itself and a recession avoided, 70 percent of respondents answered "No."

A further question on the economy drew a decisive response: "There are those who believe that frequently economic issues are overblown by the media and that this has the effect of exacerbating problems," 77.8 per cent agreed.

Commenting on the survey that was sent to recipients early last week and tabulated and interpreted Friday, Pimentel stated: "The economy and how it might affect future purchasing patterns has so dominated the public's thinking with 'round-the-clock reports and opinions by all types of media, that we were compelled to go out to our past guests for their opinions.

"We did this in spite of the fact that our continuing review of our own business has shown that the year 2007 was an outstanding one for us and our 2008 bookings are even better---well ahead of those at this time last year. And, of enormous interest to us is that as we look forward 2009 shows even greater positive response to our product.

"Nevertheless, just as with astute businesses in all sectors of the economy, we at SeaDream are always looking forward---far forward. Focused vision is a critical aspect of our financial planning.

"This survey will help us stay focused on our future and may help marketers of other types of travel products, as well as other discretionary product categories," Pimentel concluded.

Editors' Please Note: SeaDream Yacht Club has also conducted a similar survey of its travel agent sellers of SeaDream I and II. Results will be announced when the agent survey is tabulated and interpreted.