STAMPING A MARK ON JUNEAU’S HEART OF GOLD 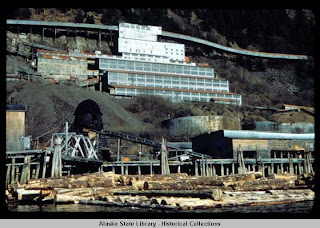 WHEN mining engineer George Pilz heard in the 1880s of gold to be found in the mountains that tumbled down to the sea around what was to eventually become known as Alaska's Inside Passage, he had no intention of hiking into such inhospitable terrain himself.

Instead he sat back in his office and put out word that if any of the local Indians could bring gold to him, he would reward them for their finds... and come to a deal on searching for more of this white man's treasure that the locals appeared to see little value in.

Some weeks later a chief named Kowee arrived on Mr Pilz' doorstep in Alaska's then-capital Sitka, and showed him a pouch-full of small nuggets recovered from a stream on the mainland opposite Mr Pilz' Baranof Island.

Getting excited, George Pilz hired several itinerant prospectors to go off with Chief Kowee in the hope they could find his El Dorado.

Sadly for him, his prospectors were more interested in hooch than hiking the rugged mountains, and swapped most of the food and fossicking supplies he'd given them, for the local firewater produced by tribes they met along the way… returning to Baranof Island with the news that if there was gold, there wasn't much of it.

Mr Pilz was pondering his next move when Chief Kowee once again turned up on his doorstep, insisting gold was to be found if the right people were sent to find it.

This time George Pilz hired two respected prospectors named Joe Juneau and Richard Harris, and with Chief Kowee they headed for what was to be dubbed Gold Creek – and at the head of this readily recovered handfuls of nuggets "the size of peas and beans."

An ecstatic George Pilz put a larger expedition together and within weeks word had spread south to the United States that there was gold for the taking in them thar Alaskan hills.

A 65-hectare site was mapped out for a prospectors' camp-site at the foot of the mountains, and within a year this became the first new town to be founded in Alaska since it had been bought by America thirteen years earlier from Russia for a mere US$7.2m.

At first it was called Harrisburg after Richard Harris, but this was later changed to Juneau and quickly boomed with the explosion of one of the world's greatest gold rushes.

Soon mines replaced hand-fossicking the icy creeks and streams for the precious metal, and by the early 1900s more than fifty stamp mills were working around the clock pounding the resultant ore.

And while Alaska's capital was moved from Sitka on Baranof Island to Juneau, like all good things the gold boom ground to an end, although not until around 40-million ounces of the precious stuff had been recovered and with small amounts still being mined to this day.

Gold's demise, however, left Juneau anything but destitute: over 1-million tourists now flock into town each year, most of them by cruise ship between the warmer months of May and September. They visit the old gold mines and stamp mills, and gawk at the unbelievably spectacular scenery that includes the snow-capped and spruce-draped mountains, and the extraordinary Mendenhall Glacier that's over 2.5km wide, 30-metres high at its face and 16km long, and regularly sheds house-size chunks of ice to reveal its dramatic aqua/electric blue interior.

And there's excellent shopping, dining and museums, while Juneau's a treasure-trove of trivia: its one of the world's few capitals not to be served by road from the outside world, with all everyone and everything coming by sea or air.

Yet despite this it's actually got more vehicles than its 31,000 residents.

And amongst more important 'services' subsidised by the local government is the town brewery… while parts of the town itself actually sit on hundreds of millions of dollars worth of gold, because as it grew, it spread over many of the 'tailings' from the old mines.

Only problem is, to retrieve this fortune, Juneau would first have to be demolished.

(For information about visiting Juneau by cruise ship, local ferry or air, contact Canada & Alaska Specialist Holidays on 1300 79 49 59 or www.canada-alaska.com.au)

. JUNEAU – built on one of the world's greatest gold rushes

. HISTORIC AJ Gold Mine and stamp mills, one of over fifty that once flourished here and now a tourist attraction.