Michael Palin: To Travel or Not to Travel

Times are hard, but we must resist the temptation to stay at home, pull up the drawbridge and look after number one. The economic crisis, this time around, is global. And to understand it we need, more than ever, to keep in touch with the rest of the world, to see how others are coping and hopefully to learn something along the way.

And let’s face it, you wouldn’t be logging onto this website if you didn’t feel, like me, that the urge to travel is not a tap that can be switched on and off at will. It’s a persistent, niggling feeling, fed by curiosity and, hopefully by concern as well.

Those of you who caught Around The World In Twenty Years, our BBC One documentary at Christmas, will have seen the joy and pleasure on all our faces when I showed the old Eighty Days DVD to some of the dhow crew we tracked down in North-East India. I was as moved as they were. Despite being able to share very little of each other’s language, the re-union showed that it’s worth reaching out, and that the effort to re-connect can be reciprocated. It wasn’t life-changing for either side, but the shared laughter and the enjoyment of our differences made me feel happy and safe, several thousand miles from home.

On that same journey we came very close to seeing the other side of the coin. Only three weeks after we’d filmed in the Taj Hotel and Leopold’s Bar in Mumbai, those who prefer to live by hatred and division had turned both places into killing grounds. And it’s no coincidence that the Taj Hotel and Leopold’s were both places in which people from all over the world came together to meet and talk.

This, it seems was the very reason they were targeted. For those with closed minds, places like these represent an intolerable threat to their own malign sense of certainty.

The attacks in Mumbai, and anywhere else in the world where people are prepared to kill rather than listen, are as clear a reason as there ever need be to keep meeting, talking, travelling and connecting.

As for me, well, I’ve no great projects in the pipeline right now. Much of the year ahead will be spent getting Diaries Volume Two 1980 -1988, the Film Years (working title) together. It’s due to be published in September, and I’ve no doubt it will send me on some promotional travels come the autumn. But I haven’t stopped buying maps or cancelled my subscriptions to Geographical, Geo or The National Geographic magazine. Nor have I stopped reading the wise and wonderful experiences of the Polish writer Ryszard Kapuscinski. His latest, “Travels With Herodotus” has so much wit and wisdom, and he tells a darned good story too. Check him out.

And check out a slim, evocative volume called Traveller by Michael Katakis (published by Burton & Park of San Francisco). I wrote the introduction because Michael represents all the best things about travelling. He listens, he learns, he writes about his love of the world simply, clearly and with feeling. And he loves eating !

Happy travels. See you on the road. 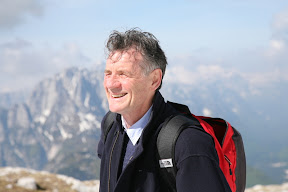