Take 20 per cent off Kimberley Cruises 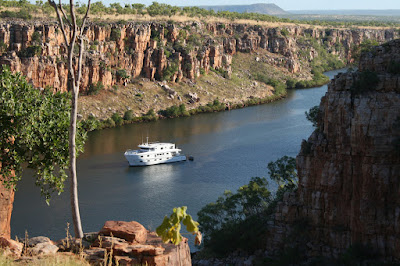 Bookings for 2009 savings have been extended from December 31 to March 31, the deadline date also set for the offer on 2010 departures.

PSCC has also announced that its scheduled rates for 2010 are the same as 2009.

Pearl Sea Coastal Cruises has 25 departures for seven-day cruises and two for the 13-day cruise during the March-October season.

Cruising is on board the 25-metre air-conditioned Kimberley Quest II, equipped with a spa on the deck and helipad for scenic flights.

Prices include a light aircraft and helicopter flight between Broome and the Mitchell Plateau (on 7-day cruises) full use of the vessel, guided land and water excursions, all chef-prepared meals (and non-stop access to the caffe latte machine on the rear deck).

What’s also in store are swimming excursions to waterfalls and stunning cliff-top rock pools, wandering along deserted beaches, day and night crocodile spotting and fishing for much-prized barramundi, mackerel and trevally ... and lazing under the sun in the spa on the bow deck as the vessel cruises along the region's rugged escarpments and into spectacular gorges, sometimes 80 metres high.