With construction of its 58-metre luxury flagship The Jayavarman right on track for its September launch date, Trails of Indochina's luxury Mekong River cruise specialist Heritage Lines has released two new impressions of how the vessel and its luxury cabin accommodation will look once complete.

The featured cabin image is of one of the vessel’s 11 Deluxe standard ‘Indochina-style’ cabins.

The cabins offer 24m sq of space which when complete will making them the largest of their type on any vessel operating Mekong cruises. 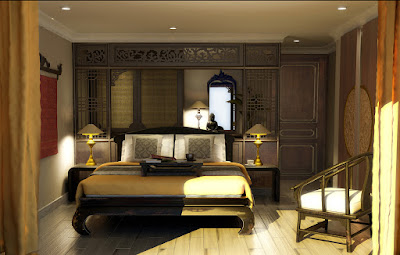 Operated by Ho Chi Minh-based Heritage Lines and part of a project estimated in excess of USD4 million, the 58-metre deluxe river boat has been conceived in what the company describes as a fusion of traditional eastern shipbuilding craft and avant-garde French colonial design overlayed with state of the art technology.

The ship’s spacious facilities also include a spa, a spacious restaurant serving eastern and western cuisine, two expansive lounges, a shop and a library spread over 800 square metres on a total five decks.

Following her maiden voyage The Jayavarman will commence operation of a medley of Mekong Delta cruise itineraries structured over two, three, four, five and eight days.