TIM’S PERCHED, READY TO LURE THE BIG ONES 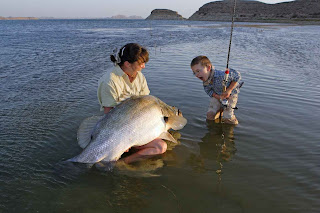 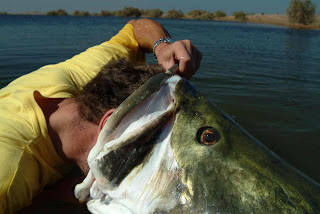 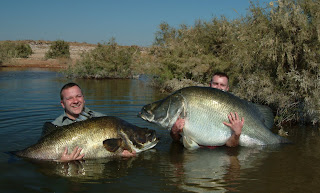 WHEN angler Tim Baily says he keeps "a few small fry for the plate," we have to wonder at the size of his plate.

Because to Tim, "small fry" are anything up to seven kilograms (which, if you've still not come to grips with metrics, is around 15 pounds or so.)

But then Tim is not your average angler: when he takes people fishing, they come home talking about catching fish almost as big as a grown man, and of total "bags" that at the end of the week can be measured not just by the tens, but by the hundreds of kilograms.

And they're happy to confine their bragging rights back home to photographs, because Tim is a catch-and-release man – except for those 7kg "small fry for the plate" for he and fellow anglers.

Tim Baily as you've probably already appreciated is not your average angler. He was running a UK tour operation specialising in travel to Egypt when, fifteen years ago, he talked the Egyptian Government into giving him the first licence to operate game-fishing safaris on the man-made Lake Nasser.

What started off with Tim, a couple of fishing boats, a few local Nubian staff and a lot of patience waiting for anglers to be convinced of the thrill of going after monstrous Nile Perch and fighting Catfish and Tiger Fish (that are a relative of South America's Piranha,) is now so successful its been emulated by others.

Tim calls his venture The African Angler and the ink seldom dries in his record books: the current "official" record is a whopping 104kg (230-pounds) Nile Perch – although a retired Indian tea planter on one of his safaris hooked another brute that broke the scales as the needle passed the 113kg (250-pounds) mark, and so could not be officially recognised.

And such catches are not just the domain of the blokes: a diminutive five-foot-nothing (1.55-metre) Scottish lady was trolling out the back of one of Tim's boats in the late 1990s when the boat shuddered to a near halt as, in her  words, "my line felt like it had hit a concrete block."

After a thirty minute battle she was pulling a Nile Perch alongside, but she, her fishing companion and their onboard guide couldn't haul it aboard. In the end they jumped into the chest-deep water and manhandled the fish ashore where it took two men to lift onto the scales.

It weighed 90kg (200-pounds) and was just under 2m (6ft 6-inches) in length. After giving it a pat on the back, they push it back into Lake Nasser and watched it swim off into the sunset.

Tim Baily's clients mostly hail from the UK, USA and Europe, but ten per cent come from Australia, and the number is increasing.

And some fifty per cent of clients are repeat visitors, which is probably little wonder with the size of Nile Perch catches and the fighting qualities of the Catfish and Tiger Fish to be had in the lake, that was created in the 1960s when the Nile was dammed at Aswan.

This flooded an area of over 6200 square kilometres and today catches of 40, 50 or even 60 kilo Nile Perch are regular events on Tim's safaris, while 10 to 20kg beauties are pretty much par for the course – like those 7kg "small fry."

Tim has five "mother ships" that provide dining areas, showers for anglers and accommodation for staff, while fishing is done from a fleet of ten 9-metre sleep-aboard fishing boats that take anglers out for the day with a guide-cum-driver.

And there's no lack of the good life throughout 6-day fishing safaris: chefs create bountiful meals that are a mix of Western and local Nubian – the latter including such dishes as Tajine, a popular casserole of lamb, beef, fish or quail that's slow-cooked with vegetables and spices until the meat falls of the bone.

Hearty cooked breakfasts start the day and picnic lunches are provided while fishing; prices for a 6-day fishing safari start from $2195pp including all meals and fishing tackle (although many anglers prefer to take their own.) Air is extra.

[] IT'S catch and release with The African Angler, so bragging rights are with photographs only.