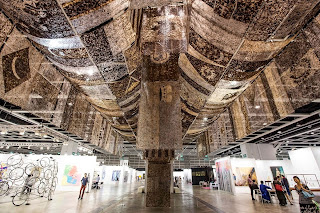 January, February, "Arts" – Hong Kong's revolutionizing the calendar with an avalanche of cultural events this March. The Hong Kong Arts Festival – now in its 43rd edition – and Art Basel Hong Kong will be joined by a new expo dubbed Art Central, turning Asia's most exciting city into a thriving arts mecca.

Artists, dealers, curators, and aficionados, as well as, interested visitors are set to pour into Hong Kong from all around the globe to get a first-hand idea of what's hot in the arts world.

Ground-breaking Art Central will debut in a specially built pavilion in the heart of the city on Hong Kong Island's waterfront, close to the Star Ferry and the newly opened Observation Wheel.  The expo will feature more than 70 galleries from around the region and further afield, and will present contemporary work from established artists and a range of young talent. Art Central has also devised a special section entitled Rise which will celebrate both solo and dual artist presentations from spaces opened in the last five years.

"We are thrilled to be launching the 'Next Big Thing' in the Hong Kong art calendar," says Art Central's Managing Director, Charles Ross. "Timed to coincide with Art Basel which annually attracts thousands of fairgoers, Art Central positions the city firmly within the first rank of global art destinations".

Fair Co-Director Maree Di Pasquale adds: "Art Central invites the art-loving public to engage with museum-quality works. We will be showcasing the next generation of talent alongside the most established contemporary galleries and art spaces from around the world in the most prominent satellite fair Hong Kong has ever seen."

Art Central will run from March 14-16, syncing with Art Basel (March 15 – 17), which started in Switzerland in 1970, later expanded to include Miami, and then launched in Hong Kong in 2013. One of the globe's must-view arts events, the fair attracts top players such as Air de Paris from France, Buchmann Galerie from Germany, Switzerland's Galerie Gmurzynska, and Gagosian Gallery, which has branches in the United States and Europe as well as Hong Kong. Numerous exhibitors – and collectors – also fly in from Mainland China.

The month-long Hong Kong Arts Festival, which first saw the light of day in 1973, is one of the highlights of the city's cultural calendar, and kicks off on February 27 until March 29.  This year's highly varied programme boasts more than 130 performances showcasing music, theatre, and dance.

The festival truly reinforces the saying that "all the world's a stage": headliners include the Zhejiang Xiaobaihua Yue Opera Troupe from China, Russia's Bolshoi Ballet, flamenco dancers from Spain, the Los Angeles Philharmonic Orchestra, and Ireland's Gate Theatre and their adaption of Jane Austen's Pride and Prejudice. There's a chance for locals to shine too, with musical extravaganzas such as the Hong Kong Story Concert.

"Great performances have a wonderfully humanising influence," says Tisa Ho, the festival's executive director and one of Hong Kong's most passionate arts advocates. "They release us from everyday life to reconnect with a self that is more vibrantly aware, more centred and at peace; allowing us to be more in tune with fundamental human values shared across different convictions and beliefs.  "The state of civilisations and societies is captured and reflected in the arts, and participating in the arts is one way of taking an active part in the history of the community as it continues to unfold."