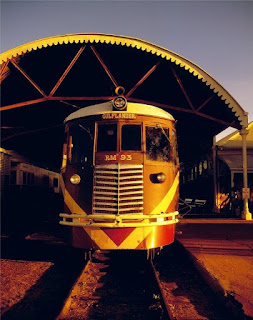 Rail buffs riding the legendary 'Tin Hare' Gulflander rail motor are in for a treat today, as the Normanton to Croydon railway rings in 125 years of service.

Queensland Rail Executive General Manager Travel and Tourist, Martin Ryan, said a trip on the Normanton to Croydon Railway was on the bucket list of many rail enthusiasts and tourists to the outback.

"Built in 1891 to connect the port of Normanton with the Croydon gold fields, the railway is one of the world's most unique rail experiences and the Gulflander railmotor is a piece of living history," Mr Ryan said.

"Much of the line is still the original rail and sleepers, with the innovative sleeper design created to lessen flood damage really standing the test of time.

"The line was never connected to the state rail network and remains the only one in Queensland still measured in miles."

The Gulflander, also known as the 'Tin Hare', is a 102 horsepower Gardner diesel engine railmotor which was built at Ipswich Railway Workshops in 1950.

"There's a rich and diverse beauty to this country. With wetlands and grasslands through to arid Savannah, the Gulflander rattles through an area full of pioneering history," Mr Fairbairn said.

A fitter and turner by trade, Mr Fairbairn's career has focused on antique machinery giving him an arsenal of skills that most of today's apprentices no longer learn.

"I teach my crew on the ground the necessary skills to maintain the Gulflander, so there is a succession plan to ensure it can continue into the future.

"Many of the original tools for the old trains are within the Normanton Railway Station museum and I've borrowed them at times to use on the Gulflander.

"The old blacksmith forge is still workable and I had to use it once on an engine component. I use the old copper irons for soldering the brass windows of the Gulflander."

The 125th anniversary celebrations today (Wednesday, 20 July), include breakfast with the Normanton community before the scheduled Gulflander trip, a birthday cake at the Blackbull siding during the journey and an evening community BBQ at Croydon.

The Gulflander carries just 111 passengers and on-board Savannah Guides share stories about the area and point out different flora and fauna species.

The Gulflander runs from mid-February to mid-November, with about 2,000 passengers making the famous journey every year. Visitors often stay to enjoy other tourism experiences, creating an economic flow on for the Gulf communities.