Sport Travel - Where you can Experience the best Football 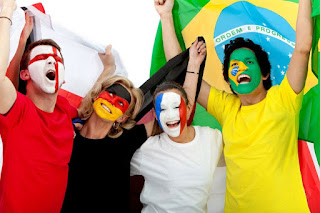 It is official - people will travel far and wide to enjoy the electrifying energy of a good footy match. Recent research carried out by Booking.com* revealed that 65% of people who travel for sport have travelled specifically for football in the past year. It's by far the most popular sport globally to travel for, and over one in five (22%) football fans would travel 10 hours or more for their favourite team. Yet 41% of those travellers said they don't even consider themselves to be super fans.

The research also finds 98% of football fans who travelled for sport did so because they love the atmosphere, and 97% agree that it gives them memories which last a lifetime. Fans have priorities other than national identity and attending a football match is about much more than just the sport itself. Going to one is a great way of being a tourist; an ideal opportunity for travellers wanting to mingle and immerse themselves in the local culture.

So Where To Experience Football At Its Best?

Here are some recommendations to help you revel in the spirit of the game and get the most out of your travel. According to Booking.com data, these cities are the most endorsed for football in their respective country.

The captivating Catalonian city of Barcelona pulsates with passion for football whenever a big event is going on. Whether you visit during an international tournament or when the city's team, FC Barcelona, is playing at home, you'll notice the entire city is brimming with excitement. Even if you don't have tickets to the colossal Camp Nou stadium, sitting al fresco at a Spanish bar to catch the game is an equally atmospheric experience.

Home of FC Bayern Munich, this city is known for both its football and its beer. Of course there's a lot more to it than that but since German fans appreciate being with other fans the most, Munich is ideal for mixing with locals. Allianz Arena is Munich's big stadium but its picturesque Bavarian streets are lovely to wander in between matches and boast a buzzing nightlife and cultural scene.

With the highest percentage of super fans in Europe, football is a massive part of Milan's identity. Even if you're not supporting AC Milan or Inter Milan, a visit here that takes in some football will guarantee you'll get swept up in the local fervour. And after the match, celebrate or commiserate over some mouth-watering Italian food – the Milanese do a mean buttery risotto.

Colourful and culturally-rich, Manchester is a great city break destination full stop. Red brick houses and a canal system decorate the city and the vibe is lively, with a hedonistic nightlife. It also has two football teams, Manchester City and Manchester United, the latter having boasted football royalty including David Beckham, Cristiano Ronaldo, George Best and Eric Cantona. And football is a huge part of the city's character, so expect to get a real taste of Mancunian life whether you head to the Etihad Stadium or cheer from a pub.

As a host city for the UEFA Euro Cup, Lens is in the travel spotlight this year. A former coal-mining town, it's heralded as a charming and multi-cultural place. With the Louvre-Lens, an outpost of the revered Paris museum, stationed here. This is beer country, so you'll find lots of tasty brews to enjoy with local French cuisine. And of course a thriving football culture.