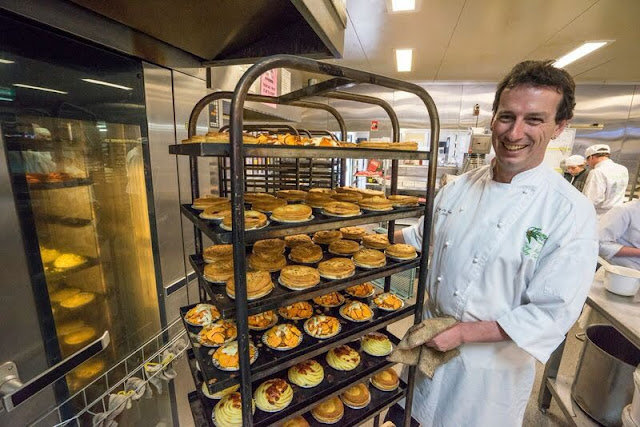 COULD New South Wales be on the verge of having a new geographical region – the Southern Pie-lands, after the stunning success in June of Australia's first-ever month-long celebration of the great Aussie pie in the Southern Highlands between Sydney and Canberra?

Dubbed Pie Time, it saw a mind-blowing 100,000-plus pies wolfed down during the month by locals and visitors alike in cafés, pubs, restaurants, take-away shops and home dining rooms, and had chefs working 24-hours straight at times to keep ovens catering for demand… or having to shut up shop early after simply running out of supplies.

And pie aficionados happily told of driving from Victoria, the ACT, Queensland and from across New South Wales to experience as many as they could of the diversity of pies they'd heard were on offer, pies both hot and cold, and sweet and savoury.

With thirty direct-outlet pie bakeries, the Southern Highlands have more per square kilometre than anywhere else in Australia, and as well as offering-up the products of these, organisers of Pie Time oversaw pie tastings, pie and beer matchings and pie talks.

And all said they were absolutely blown-away with the interest in Pie Time and demand for their products, which far exceeded all expectations.

Plus there was a pie judging, with the title of Grand Champion Pie going to a beer-braised pork neck in short pastry dubbed The Bernie,  that was created jointly by owner/pie maker at Southern Rise Pies at Moss Vale, Matt Fitzgerald and owner/chef of Bernies Diner in Moss Vale, Ionnas Benardos.

And as pie aficionados are already saying, June 2018 can't come quickly enough in the Southern Pie-lands.

(If you want to know more about the Southern Highlands and what to enjoy there year-round, go to https://www.southern-highlands.com.au/)

[] OWNER of Gumnut Patisserie in Bowral, Tracy Nikl rolls out another cart-load of pies for Southern Highlands Pie Time that saw locals and visitors wolf down a guestimated 100,000 pies during June's first-ever month-long Pie Time. (supplied)