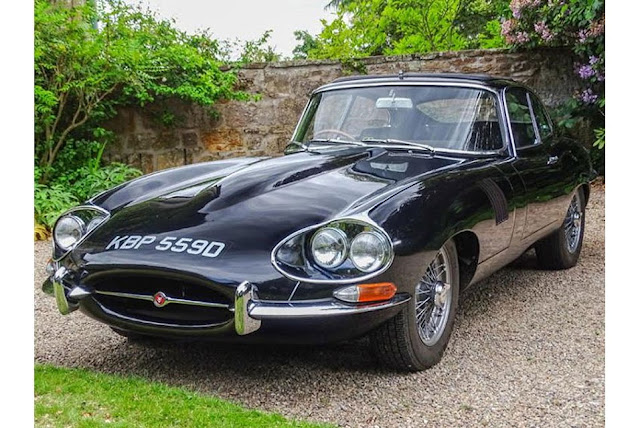 CLASSIC car buffs in the UK are eagerly waiting to see what will be paid for an "ultra-rare" 1966 Jaguar E-type when it goes to auction in mid-October.

Because it is one of just three E-types to feature a unique "quad headlamp, shark gill bonnet" created by Abbey Panels that specialises in premium car body re-panelling for well-heeled bespoke customers, plus it also has a competition-capability engine and racing wheels as well.

And more bizarrely, it is the only remaining E-type of no fewer than seven owned by Hugh John Vaughan Campbell, the Sixth Earl of Cawdor, who unbelievably crashed and wrote-off every one of the other six.


Which was such a good effort that His Lordship's daughter, Lady Liza Campbell wrote of it in her autobiography 'A Charmed Life: Growing up in Macbeth's Castle,' a book in which she told of living with her father in Scotland's Cawdor Castle, the centuries-old family seat of the Campbell's and which featured in Shakespeare's Macbeth.

And of how her father "fuelled by drink, drugs and extramarital affairs after being overwhelmed by the enormous responsibilities associated with owning and running Cawdor Castle," managed to write-off those six Jaguars - and yet miraculously survive all half-dozen prangs.

"Pa typically crashed at night, after dinner," she wrote. "His philosophy being that obeying a red light after midnight was a waste of precious time.

"And instead of spotting any correlation between drinking and the crashes, my father came to an altogether different conclusion: That E-types were rubbish. and after the seventh crash he took to driving Ferraris."

His family had that last E-type repaired after his death in 1992, and eventually sold it in 2003.

Now those circa-2003 buyers are putting it to sale again on October 17 through H&H Classics Auctions, with expectations that with its colourful history, it could fetch up to 50,000 British pounds (around AU$88,000.)

[] THE only remaining Jaguar E-Type of no fewer than seven owned by the late Sixth Earl of Cawdor - who crashed and wrote-off all other six - will go to auction on October 17. (Image: H&H Classic Auctions)
Posted by rodeime