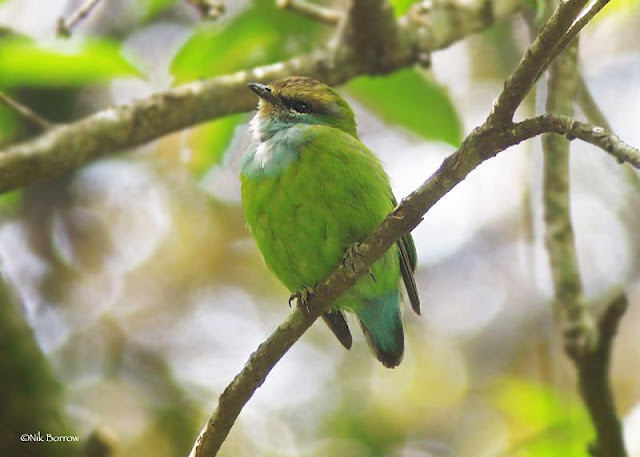 The Bwindi Impenetrable National Park offers more than just gorillas in the mist.

Bwindi Impenetrable National Park lies in the southwest corner of Uganda on the edge of the Rift Valley. Uganda's oldest forest, it boats a truly theatrical landscape of volcanoes, jagged valleys, waterfalls, lakes and dramatic mountain ranges and is internationally famous for its endangered mountain gorillas. Less well known, it's also a haven for bird watchers, home to an astonishing array of endemic bird species that are rarely found in any other part of East Africa. And the star attraction? The globally threatened African Green Broadbill (Pseudocalyptomena graueri) aka Grauers Broadbill.

Only found in south-west Uganda (Mubwindi Swamp), Itombwe Mountains (Democratic Republic of Congo) and mountains west of Lake Kivu, Bwindi is by far and away the safest and most accessible place to catch a glimpse of this beautiful leaf green bird. But be prepared to work hard for the privilege as its preferred habitat, at an altitude of around 2,300m, ensures sightings are the preserve of a chosen few.

Located deep inside Bwindi Impenetrable Forest, Sanctuary Gorilla Forest Camp is an ideal base for encounters with both gorillas and the African Green Broadbill. Featuring just eight luxuriously appointed tents, the Camp is one of the most secluded and atmospheric in Africa and is the only luxury camp within the UNESCO World Heritage Site.

Offering birdwatchers an unrivalled location, including the best bird and wildlife viewing in the Bwindi area, the camp often receives regular visits from the gorillas themselves, delivering guests a chance to engage with these awe-inspiring primates without even leaving the Camp!