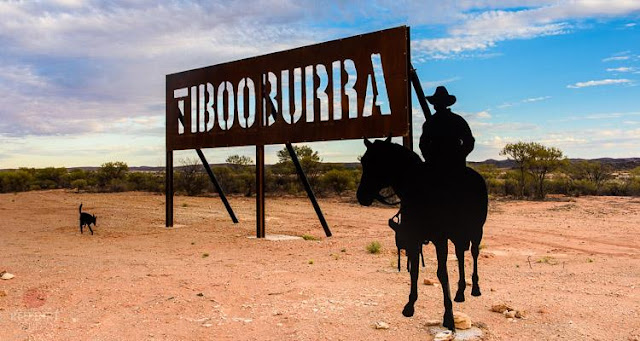 There is something impossibly romantic about Tibooburra; there it is in the far north-western corner (Corner Country) of New South Wales. Tibooburra is 335 km north of Broken Hill, 1504 km north-west of Sydney, 900 km from Adelaide. It seems so isolated and yet it is full of friendliness and activity.

It is frequently the hottest place in the state with temperatures rising above 40degC.

Tibooburra has a pub, The Family Hotel, where some of Australia's most famous artists have painted memorable images on the walls. There is also a marvellous Pioneer Park (often with not a blade of grass) with a wonderful sculpture of a full-size 27-foot long whaleboat perched on the top of some poles - a replica of the whaleboat Charles Sturt hauled across inland Australia. And here, on the edge of the huge Sturt National Park you can really feel as though you are in the heart of the desert.

Tibooburra is the closest town to the magnificent Sturt National Park. Located in the north-west corner of NSW and bordering South Australia to the West and Queensland to the north, this massive park provides the visitor with a great insight to the geomorphology of Outback Australia with ancient eroded mountain ranges and vast gibber plains easily illustrating the concept of the inland sea that early explorers believed covered the interior of Australia. The park also provides several vantage points to the Dingo Fence.

In the eastern section of the park, there are three wonderful and informative self-drive tours:
You haven't really understood the Australian outback until you visited Tibooburra.
MORE: