A Norwood and Stepney Institute was formed in 1855 by a group that met in a schoolroom in Beulah Road, Norwood. Lectures were soon advertised and a library of 200 books organised.
The following year a different group met in Mr Barrow's old chapel in Kensington for a similar purpose and proposed an amalgamation with the other group.
Both of these initiatives soon faded, perhaps for the want of suitable premises.</p><p>The formation of the Kensington and Norwood Institute in 1872 saw 100 locals with the mayor set up a committee to prepare plans for an institute. building. Land on the corner of the Parade and Osmond Terrace was bought and plans drawn up. The building was of grand proportions and erected in two stages, beginning with the two-storeyed front for the library, reading room, cloakrooms and upstairs offices. This part cost £1,585 and was opened by the SA governor in 1875. Debt restricted further developments until Sir Edwin Smith, the foremost supporter and long-time president of the institute, cleared the debt.
In 1882, the second stage of the building was completed with a hall, classrooms, basement and caretaker lodgings.
It was described as palatial.
By 1900 the institute had 319 subscribers and over 6,000 books. The reading room was open daily from 6.30pm to9.30pm.
The institute launched an art school that year with classes in design and painting. Classes in needlework and carving, and other classes for children on Saturday mornings, were planned. A separate library room for 6 to 15-year-olds was opened in 1918 and supported by local teachers.
It was open on Saturday afternoons and in school holidays. The number of subscribers continued to rise - to 772 in 1921.
But by 1935 membership was declining, due, it was thought, to radio's popularity and competition from private threepenny libraries.
Grants from the district council and income from the institute's subscriptions and its annual fair were not enough to maintain a well-functioning library and an ageing building.
In 1977 the institute property was transferred to the council.
Ten years after that, as part of the state government's policy to phase out institute libraries in favour of free public libraries, the institute was dissolved.</p><p>The building was refurbished as the Norwood Library and in 2022 it became a branch of the Norwood Payneham and St Peters Library.
For more about this Institute and the 350 others that we have had in SA, go to institutessa.com
by Joelie Hancock / The Adelaide East Herald 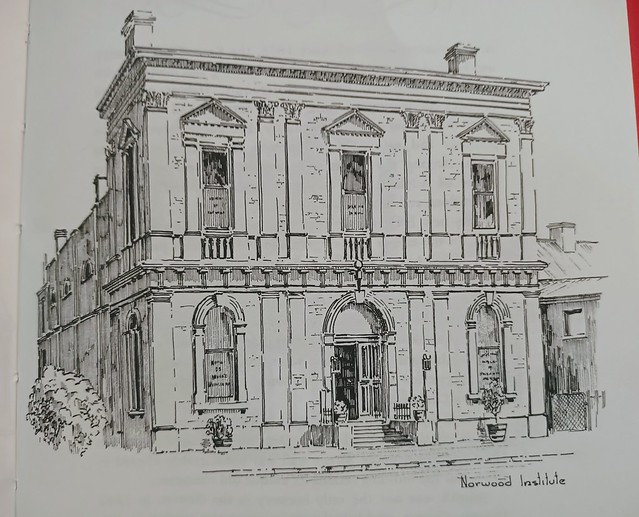 A meeting called by Mayor E. T. Smith in 1872 formed a committee to build the Norwood Institute. They raised funds and bought land at the south-west corner of The Parade and Osmond Terrace. There was great enthusiasm for a building to cover the whole site, but there was not enough money for this and the eastern half of the land was sold as the site for a post office. W. H. Abbott prepared plans for a smaller building, but even with a government grant of £750, funds were still inadequate and the committee called tenders for the erection of the two-storeyed front section only. A. C. Chapman's tender of £1,358 was accepted. In September 1875 Governor Musgrave laid the foundation stone. After the ceremony was over, Mrs Musgrave opened a bazaar at the town hall, and this raised £120.

The library opened in a small, top room in 1877 with twenty-five volumes and twenty-seven subscribers. In 1882 a contract was let to W. Pett and Sons to build the main hall, basement, and caretaker's quarters. The completed building was opened in May 1883 with a concert given by pupils of the Model School in the presence of Governor Robinson and the Minister of Education, the Hon. J. L. Parsons. The library was moved into the main hall in 1895 and within five years had 7,332 volumes and 356 subscribers.

The style of the building is typical of its day, both inside and out, except that the handsome cast-iron fence and gates. with arched wrought-iron lamp supports finely scrolled, were removed during the Second World War for a patriotic scrap iron drive.

- text by Daniel Manning from Kensington and Norwood Sketchbook | Rigby