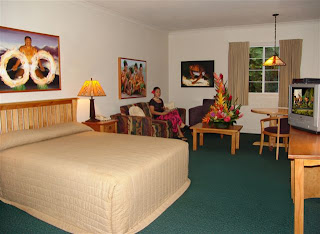 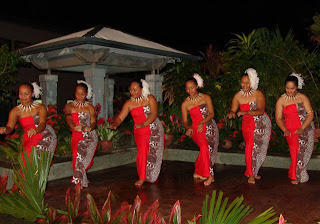 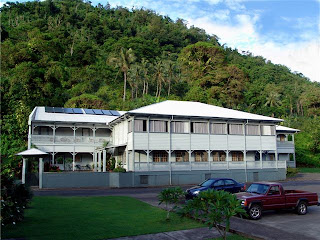 YOU'VE got to admire  a bloke who invests a million bucks or so in building a boutique hotel in  Samoa, and then names it after a  hooker.

But hey, this is the South Pacific and Tom Drabble is a Kiwi. But he's a Kiwi  with business acumen, imagination – and a  nice sense of humour to go with it.

In his yarn, based  loosely on a trip he made by ship from Honolulu to Pago Pago, Maugham weaves a  fascinating tale of the relationship between passengers sailing with him to  Apia, and who are delayed by a tropical storm that forces them to hole-up in a  sleazy Pago Pago rooming house.

Amongst them are a  dour Scottish doctor and his wife, a brassy American "Miss Sadie Thompson," and  a pious and hypocritical missionary of unknown nationality who ultimately  slashes his throat after being seduced by Sadie – whose soul he insists he was  attempting to save when explaining his prayer meetings in Sadie's room to his  equally pious wife ("we've not allowed the natives here to dance for eight  years," the wife boasts.)

Maugham based Sadie  on a young lady who galloped up the gangway of his ship at the very last minute  in Honolulu, "a blonde runaway" he discovered had been forced out of the city's  then-notorious Iwelei redlight district during a police crackdown.

Samoan historians  have confirmed that Maugham's ship, the Sonoma,  arrived in Pago Pago in 1916, and police records  reveal a single female passenger left the Sonoma  to stay at "a waterfront boarding residence" before "opening a house of  prostitution catering to U.S. sailors…"

Other records show  that several attempts were made to deport Sadie, who finally returned  broken-hearted to Honolulu after a failed Samoan romance.

And although "Sadie  Thompson" then disappeared without further trace, in the short time she lived in  Pago Pago,  thanks to Somerset Maugham she became one of the South Pacific's great  legends.

Fast-forward now to  1964 when Tom Drabble arrives in Pago Pago from  the little town of Te Puke south of Auckland, to work with a  construction company.  Tom falls in  love with Samoa and a local lady, Ta'aloga, and  when the construction job is finished, stays on.

In 1989 he opens  Sadie's Bar and Restaurant on the Pago Pago  waterfront, but after incurring substantial losses, buys out his partners and  closes Sadie's for a year, totally redeveloping it into his new Sadie Thompson  Inn that opened in downtown Pago  Pago in November 2003.

And dining in  Sadie's Restaurant is amongst the best in Pago Pago, particularly as Tom has a pipeline  to freshest local seafoods and market garden crops.

And if you ask Tom  if it's somewhat odd to name a classy, boutique hotel after a hooker, he's quick  to point out that Sadie is one of the South Pacific's grandest legends – good  enough for Somerset Maugham to immortalise her, and Hollywood to make three  films based on her exploits.

The first was a  silent 1928 flick starring Gloria Swanson, the second starred Joan Crawford in  1932, and the third Rita Hayworth in 1953: as the Hayworth movie was made at a  time of moral tub-thumping in America, Sadie had to be portrayed not as a  prostitute, but as a nightclub singer "with a past," while the morally corrupt  missionary Alfred Davidson was re-characterised as an unaffiliated religious  zealot so as not to offend any sections of the church.

But it did offend  one US Senator who described the film as "rotten, lewd, immoral… just a plain  dirty picture."

With recommendations  like that, no wonder Tom Grabble's Sadie Thompson Inn is on a winner.

[] Room at the inn –  spacious accommodation at Sadie Thompson Inn