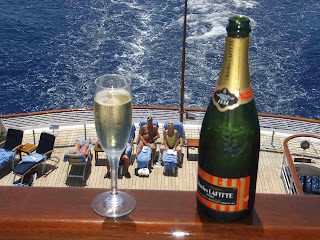 SMOOTH SAILING – IT'S A SEADREAM


IF you think this photo is of a calm Australian lake or harbour cruise, think again – it is in fact aboard mega motor-cruiser SeaDream II in the middle of the Atlantic Ocean as she crossed this month from Barbados to Portugal and Spain on a near dead-flat sea.

And the sun-loving couple snapped between the bottle and the glass are Aussies – Valerie and Tony Madigan from Dural in Sydney's Hills District.

Ninety-one guests were aboard SeaDream II that was transferring over 12-nights from her annual Caribbean season to the Mediterranean where she'll operate until November this year, when she returns again to the Caribbean.

The Madigan's are not new to sailing SeaDream II or "sister" SeaDream I: they've been doing so since the early 1990s when the "mega-twins" were known as Sea Goddess I and II… and they've already booked themselves on SeaDream I in November for her 11-night crossing of the Atlantic from Tenerife in the Canary Islands to St Maarten, St Barthelemy and Antigua.

If you are interested in this blue-water experience aboard the world's highest-rated boutique ship, that includes 95 crew to serve 55 couples, gourmet 5-star dining, drinks from the bars, wines with meals, nightly cocktails, a 50-course golf simulator, fitness centre, watersports where local authorities allow, port taxes and onboard gratuities, see travel agents or www.seadream.com

Prices start from US$3627pp twin-share, a saving of US$1800 on originally brochured fares; air travel is additional.