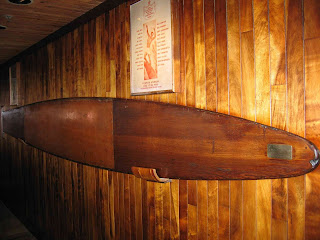 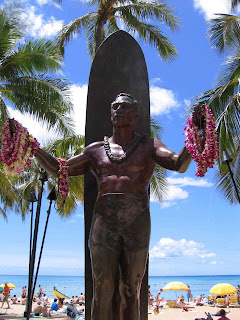 THERE are three types go to Duke's Restaurant and Barefoot Bar at Hawaii's Outrigger Waikiki hotel.

Those seeking a drink with one of the best views of the world's most famous sands, those looking for a good feed with the same views, and those who pay homage to a bloke whose life story reads like Boy's Own Annual.

Duke's is named after Duke Paoa Kahanamoku, Hawaii's most-loved sporting son, hero and legend who thrilled his own people with his prowess on a surfboard, stunned Olympic officials with his times in the pool, figured in an amazing surf rescue off California, played in 28 Hollywood movies, and taught some of Australia's earliest board riders.

In-between he made headlines when he wrestled to death in the surf an 3.5m eel, served as a Sheriff, and ran a gas station.

Duke Kahanamoku's name had nothing to do with Hawaii's one-time royalty (Honolulu still has the only royal palace in America,) but after England's Duke of Edinburgh who'd visited Hawaii in 1869.

Born in 1890, the young Duke was besotted with swimming, surfing and canoeing, but when colleagues tried to have his amazing times and feats recognised, they were told this was not possible as he was not a member of a registered club.

So they set up their own, calling it "Hui Nalu" (Club of the Waves.)

Finally recognizing his achievements, American Olympics officials invited Duke to vie for a spot in their swimming team at the 1912 Amsterdam Games. He qualified with an extraordinary 100-metres dash at trials in Chicago… but when he went to Amsterdam he slept in, and it was only after he begged organisers to delay his event while he put on his costume, that he went on to break the world record.

In-between, his prowess at surfboard riding saw him invited to give demonstrations in California and Australia – and while it was long claimed he "brought stand-up surfboard riding to Australia" when he gave demonstrations and lessons at Freshwater Beach in Sydney in 1914, historians say that locals had already been surfboarding at next-door Manly and other beaches for several years on boards imported from Hawaii.

They point to photographs at the Yamba Historical Museum on the NSW North Coast of a Tommy Walker riding a surfboard off the local beach in 1910 (including while standing on his head,) while the Australian Surf Museum in Manly rescued a board that Charles Paterson rode at North Steyne two years before Duke's visit, after finding it being used as a family ironing board.

Duke Kahanamoku's life was always associated with the water and the unusual: in 1917 he rode an 11-metre wave for 2.8km off Waikiki, and in 1925 while living in America as an actor used his board to single-handedly save eight people whose launch capsized off California's Corona del Mar beach.

And when a 3.5m eel the thickness of his leg bit off his right index finger off California's Long Beach in 1913, he strangled it to death in a 10-minute struggle in the surf.

After retiring from Olympic swimming in 1932 (he won three Olympic Golds, two Silvers and a Bronze and was inducted into the Swimming, Surfing and US Olympic Halls of Fame,) Duke also retired from Hollywood and returned to Hawaii where he served a record 26-years as Sheriff of Honolulu.

He also launched his own line of surf clothing, ran a gas station and at fifty years of age finally married his long-time love, Nadine. When he died in 1968, thousands led by a 30-officer police escort followed the 78-year old's ashes to where they were scattered off his beloved Waikiki Beach.

Duke's original 4m-plus solid redwood surfboard is on display in Duke's Restaurant and Barefoot Bar at the Outrigger Waikiki hotel with other memorabilia; the Bar is open from 11am to midnight and the restaurant for breakfast, lunch and dinner with typically American-hefty servings of salads,  sandwiches, pizzas, burgers, seafoods, steaks and prime rib  – and a million-dollar view.

DUKE's original solid redwood surfboard on the wall of Duke's Restaurant and Barefoot Bar at the Outrigger Waikiki.