I'm conscious, as ever, that a lot of water has flown under the bridge since my last message. Since then I've been working hard at an edit of my Diaries 1980 -1988 in time for publication next year, whilst watching Archie grow up and trying to come to terms with my identity theft by a hockey mum in Alaska. And no, Sarah Palin is not my sister, daughter or alias. And I'm Sahara Palin not Sarah.
After a grey old summer in London I'm about to set out for the heat again with some of the old team, on a new journey, currently called 80 Days Revisited, which will hopefully be shown as a one-hour special on BBC-1 around Christmas. At the same time Weidenfeld and Nicolson are publishing a new edition of Around The World In Eighty Days. Because some of the original pictures have gone missing in the twenty years since, we've trawled the archives and found some great new photographs and the book will be completely re-designed. I've written some new material, including a new preface and a short new chapter describing our return visit. So here, good and patient website friends, is the latest on the latest journey.

A new look at an old adventure

In Eighty Days Revisited we may not be going back to the Reform Club or ballooning over the Rockies, but we will be returning to the scene of one of the best-remembered sequences of any of my travel adventures, the dhow journey From Dubai to Bombay, episode three of Around The World In Eighty Days. As we sailed agonisingly slowly down the Persian Gulf on board one of world's oldest surviving traditional sailing ships we formed a unique relationship with our Indian crew. Mutual incomprehension gradually gave way to friendship and affection, as we accepted the fact that our lives, and the success of our journey Around The World In Eighty Days was in the hands of this band of ragged, under-paid sailors from Gujerat.

After a week at sea together, I found our farewell at Bombay to be one of the most emotional moments on all of my travels. As I said on film at the time : "It's almost impossible to accept that I shall never see them again".

Well, twenty years after we waved each other good-bye in the crowded waters off Bombay I'm trying to prove that nothing is impossible by setting out on a search for the crew of the Al-Sharma.

With the same cameraman who shot the original dhow journey we shall re-visit Dubai and meet those who found us the dhow in the first place, and then on to Bombay, now Mumbai, to see if, in the intervening twenty years that great teeming city has changed in more than just name. From Mumbai we take the over-night train north and west to the little town on the Indian Ocean from where many of Al-Sharma's crew hailed.

What happens here is far from certain, but I'm hoping to make contact with as many as possible of my old ship-mates. If all goes well we'll renew a unique friendship by sitting down together to watch, marvel and laugh ourselves silly at our adventures of twenty years' ago, when, together, we made our slow but happy way from the Middle East to India.

This return journey, the first I've ever attempted, will be as much of a challenge as the originals. There are plenty of if's and but's on the way, but, for me, and hopefully for you, this promises to make Eighty Days Revisited all the more exciting. 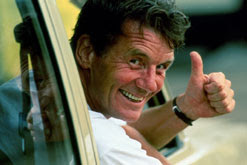