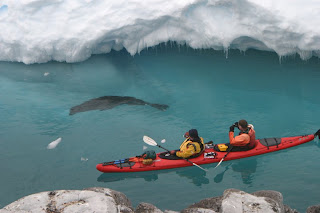 Can you imagine what it would be like to spend the night camping under the stars in the most remote location on earth? Or scaling an as yet unnamed mountain that few have even seen, let alone climbed? What about scuba diving in a fascinating underworld of gigantic icebergs amongst marine creatures found nowhere else?

In its ongoing quest to provide the most extraordinary environmentally sensitive adventures in Antarctica, Aurora Expeditions has ten voyages during the Antarctic season between November 2009 and March 2010, which offer the most comprehensive program of adventure activities of any Antarctic tour operator including camping, mountain climbing, scuba diving and kayaking.

During the Antarctic summer, there is almost 24 hours of daylight, which makes it possible for travellers who want to push the limits and become one of the handful of people who will ever experience these adventures in the most extreme wilderness on the planet.

A 12-day 'Antarctic Peninsula for Climbers and Kayakers' (7 -18 December 2009) voyage offers the chance to climb icebergs and unclimbed peaks or paddle in pristine waters led by some of the world's most experienced mountain climbers and guides.

A 12-day 'Across the Circle' (16 – 27 February 2010) voyage includes the opportunity to scuba dive below the Antarctic Circle in a once-in-a-lifetime underwater adventure.

A 20-day 'Shackleton Odyssey', (27 February – 18 March 2010) voyage retraces the epic journey of the great explorer Sir Ernest Shackleton and offers the option for experienced climbers to repeat his alpine crossing on foot from King Haakon Bay to the now deserted whaling station at Stromness on the fabled island of South Georgia.

There are also four trips that include an opportunity to camp out overnight on the ice.

Prices start at US$5990 (ex-Ushuaia) per person triple share and include all meals on board, shore excursions, and an in-depth education program with expert commentary and talks by Aurora's team of naturalists, historians, geologists, expedition staff and special guest lecturers. The voyages also provide maximum wildlife viewing opportunities and visit a number of historic sites and scientific research stations.

There is never a better time than now to take the trip of a lifetime. So if you're ready to take the plunge contact Aurora Expeditions on 1800 637 688 or visit www.auroraexpeditions.com.au
Posted by rodeime