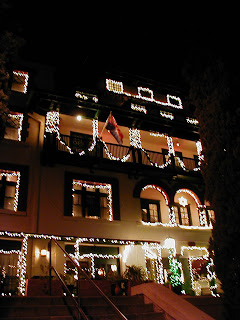 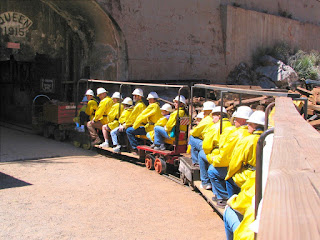 THERE was a time when you could go into a pub and buy a beer for a dollar.

In the little Arizona town of Bisbee in 1970, artist Stephen Hutchinson went one better than that: with his wife Marcia he walked into the historic local pub, put down his dollar and came away with what he wanted.

Not a beer, but the pub itself.

Bisbee, 130kms south-east of Tucson and 15km north of the Mexico border,  was once one of America's toughest Wild West mining towns, sporting a couple of hundred saloons and brothels for the near-30,000 population of mostly gold and copper miners interested mainly in drinkin', feudin', fightin' and, yes, well…

Yet its equally tough and strong-willed civic leaders somehow tamed Bisbee. They built churches, a museum, an enviable library, schools, a YMCA Centre, encouraged families into the area and somewhat miraculously turned Bisbee – then the largest city on the rail line between Saint Louis and San Francisco – into one of America's most-cultured cities for its time as well.

From the 1880s to 1970s Bisbee's mines in the ore-rich Mule Mountains were amongst the wealthiest in the world, producing nearly 3-million ounces of gold, over 3.6-million kilograms of copper, and millions more of silver, lead and zinc.

But when they closed in the 1970s the population dwindled from 30,000 to a fifth that, and today Bisbee provides a rare opportunity to visit a community that still cherishes and proudly wears its links with the Wild West on its arm – but without the kitsch of other one-time Wild West communities.

And it is home to a thriving artists' community, provides a bolt-hole for hippies and other colourful characters and drop-outs, is a haven for activity-minded retirees, and is one of America's most-accepting communities for gays and lesbians.

Victorian-era and European-style homes nestle in its foothills alongside Wild West-era cottages, one-time saloons are now art galleries, coffee shops, boutiques and antique stores, and the Copper Queen Hotel that took four years to build from 1898, is a welcoming hostelry once more, with restored Wild West-style bars and restaurants.

The hotel was carved into a hillside by one of the mining companies, Phelps Dodge Mining that also owned grocery, hardware, clothing and other businesses – and cleverly paid its employees in cash, so that what went out from one hand on pay-day, was collected back through the other by week's end.

The Copper Queen's stone and brick walls are two-thirds of a metre thick to insulate it from the heat of summer and retain warmth in winter, and for some reason never explained, it was designed along Italian lines with Italian mosaic tile floors, and with a cathedral ceiling over the lobby fitted with priceless Tiffany glass – that equally mysteriously was dismantled one weekend and has never been seen again.

And the hotel's Saloon still features a near-life-size portrait of British stage actress Lily Langtree, the love interest of Edward Prince of Wales, and said also to be the secret love-wish of Texas Judge, Roy Bean – although he never met her.

Stephen and Marcia Hutchinson bought the shuttered-up old hotel after the Phelps Dodge Mining couldn't sell it – and offered it for $1 to any local  interested in buying and restoring it.

Bisbee has a very active Chamber of Commerce and Tourism Office and has almost weekly community events, celebrations and festivities running the whole gamut of social, recreational and cultural interests.

They include a desert bird observatory, daily tours of the abandoned Copper Queen Mine (after which the hotel was named,) weekly Ghost Tours of reputedly-haunted sections of the hotel, a ghost tour every January of the historic and world-famous Bird Cage Theatre, weekly Saturday Farmers Markets, a Gay and Lesbian Pride Weekend and Leather & Lace Ball in June,  Annual Brewery Gulch Daze in September and National Cowboy Day the same month, even a Wine Festival in October and an Historic Homes Tour in November.

And in October, a bizarre Ice Man Stair Climb in which contestants run up 135 stairs in under 30 seconds while lugging large blocks of ice.  Another of Bisbee's unexplained little mysteries.

For details of events, accommodation and getting to Bisbee, phone Canada & Alaska Specialist Holidays on 1300 79 49 59.

[] BISBEE – the Wild West lives on here amid the Mule Mountains

[] GOING DOWN: visitors about to descend into the abandoned Copper Queen Mine