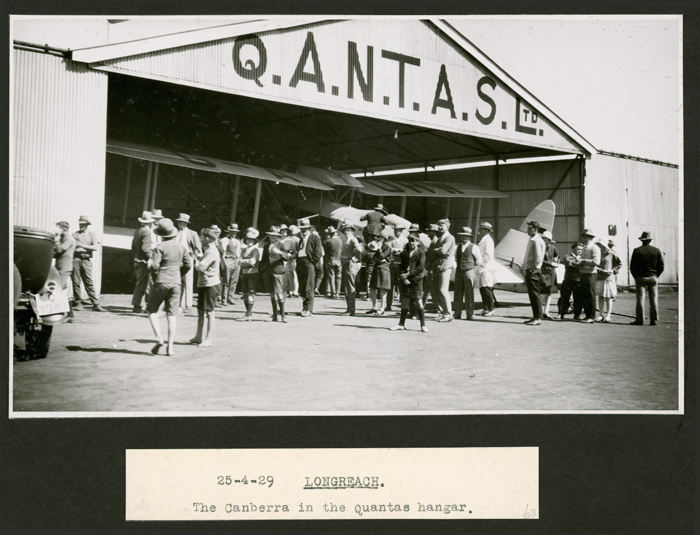 QANTAS, the world's second oldest airline, was registered on 16 November 1920 as Queensland and Northern Territory Aerial Service Ltd. While Winton was the official birthplace, the company and operational headquarters were moved to Longreach in February 1921.

Following a fire in April 1921, commercial operations were conducted from a small office in Duck Street, a replica of which has been erected in Qantas Park, Eagle Street. From May 1922 until June 1930 when the company moved to Brisbane, Qantas operated from the Graziers Building also in Duck Street.

The airline's founders were Paul McGinness and Hudson Fysh, two former Australian Flying Corps pilots, Ainslie Templeton and Fergus McMaster, local graziers; and Alan Campbell, a principal of Queensland Primary Producers Co-op of Brisbane. Shortly after the first aircraft was purchased they were joined by Arthur Baird, an Australian Flying Corps associate of Fysh and McGinness, who filled the role of engineer.

By May 1921, initial subscribed capital was $13700 (6850 pounds), of which McMaster, Templeton, Fysh and McGinness had personally contributed $6600 (3300 pounds). Pastoralist Alexander Kennedy also made a substantial purchase of shares conditional on being the first passenger on the scheduled service.

In March 1922 Qantas sought Department of Defence permission to improve the Longreach aerodrome. At the same time, the company let a contract for $3274 (1637 pounds) to a Brisbane firm Stewart and Lloyds, for supply and erection of the now famous hangar. It was completed five months later.


On 2 November, the Qantas Charleville-Cloncurry aerial mail service was inaugurated. An Armstrong Whitworth FK-8 flown by Paul McGinness left Charleville at 5.30am and after stops at Tambo and Blackall landed at Longreach at 10.15am. Early next day, Hudson Fysh with Arthur Baird as engineer flew 84-year-old Alexander Kennedy to Cloncurry. Kennedy's condition had been honoured! The 797km (580 mile) flight took nearly eight hours

With Arthur Baird and his skilled team repairing a constant stream o unserviceable aircraft, the hangar a Longreach became the focus of Qantas operations.

By 1925, increased reliability resulted in the hangar being underused In January of that year, Qantas reacher an agreement with de Havilland to build its own DH50 aircraft under licence.

When the DH61 superseded the DH50s they proved too large for Qantas to build locally and production ceased in September 1929.

As well as repairing and building aircraft, in December 1926 Qantas opened a flying training school at the hangar.

When the administration moved to Brisbane in June 1930, the close physical and administrative links between Qantas and Longreach ended. The BrisbaneLongreach service continued until World War II ended. Under Federal government ownership, Qantas was to become Australia's International Airline.

American B-17 Flying Fortresses were stationed at Longreach from May until July 1942 and flew combat missions into the Coral Sea. The American personnel were from the 93rd and the 28th Bombardment Squadrons.